On August 4, 2015, I celebrated my one year anniversary of being "cancer free" or NED (no evidence of disease) as my doctor says. It was an important day for me. More than anyone could truly understand. I decided on that day because it was when I had my surgery and since I had clear margins and no lymph node involvement that's what I went with. Not when I finished chemo, which was five months ago.

When I look back to the past year, I can't help but think about ALL of the ups and downs. Each holiday I obsessively took pictures for fear that it might be my last one. I wanted each and every holiday and birthday to be celebrated and the best one yet. I couldn't have made it through the past year without God, my family, friends and most definitely my surgeon and oncologist.

On August 3, 2015, I had an appointment with both doctors. It was a really good appointment. I had an "ah ha" moment as to how truly lucky I was to have this found when it was. To be able to have surgery. To have access to good healthcare. It wasn't until that appointment with my surgeon did I fully grasp the severity of the situation. I know more about Cholangiocarcinoma and it all made so much more sense.

My tumor was the size of a softball and dangerously close to the portal vein. Which is why he had to remove 80% of my liver. He showed me before and after pictures. I suggest you all do it. If you have the opportunity to have a resection. It's a real eye opener.

My oncologist was very happy with my progress. My blood work looks good. However, my platelets are still very low but not dangerously low as he said. My spleen is currently enlarged and he feels that there is some blockage in my spleen and that is where my platelets are trapped. They will continue to keep monitoring it. I will continue with another year of scans ever three months.

But how did I get here you ask? After surgery I had a power port put in about six weeks after and a two weeks later started chemo. I was supposed to do 16 infusions of Gemcitabine and Cisplatin but was only able to do 13. Of those 13, I did both kinds of chemo for 10 treatments and some of those the Cisplatin was reduced. It wasn't until my third treatment that we needed to start adjusting things. In fact, that day I was only to receive Gemcitabine. I was disappointed. Which totally sounds crazy, right? I just wanted to do everything in full force for fear it would/will come back.

My body didn't really care for the Cisplatin and neither did I to be honest with you. Often my white blood cell count was too low for treatment and I had  a few times when I couldn't even receive treatment. In order to boost my WBC, I had to give myself Neupogen injections, which caused severe pain throughout my whole body. I felt like a giant bruise. Everything was so tender but after a day or two it got better. I did use Neulasta one time. Most people I've talked to felt Neulasta was worse but not in my case. Chemo also caused me to need a blood transfusion. That is a bizarre experience as well. Think about it.....you're getting someone else's blood pumped through your veins and into your body. My dad is a blood donor. So I told myself, it was his. I am very thankful for people who donate blood as well. (The picture below is my actual transfusion.) 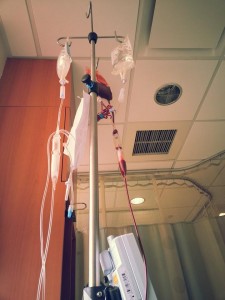 Chemo is a poison but a necessary one. It was not enjoyable, in fact it was terrible but could have been worse. I am thankful I my hair only thinned and didn't lose it. I was prepared though. I was willing to do anything to keep this from returning. It is physically and mentally draining. Nothing will prepare for your first day of chemo.

If you have long infusions like myself, you want to be prepared (snacks, something to read and comfy clothes). It took me about an hour and half to travel from my home to NYC. About an hour from the time I checked in, registered and got my blood drawn. Another hour or more until I saw the doctor. Then another 30 minutes before I was called back into my own chemo room, which was like a mini hospital room and if I was lucky my own bathroom. For those of you on Cisplatin you know how important it is to have your own bathroom. The first day I had two hours of IV fluids, 30 mins of Gemcitabine, one hour of Cisplatin and another two hours of fluids. Then another hour to an hour and half car ride home. So it was approximately a 10 hour day, give or take. When you are on Cisplatin they pump you full of fluids and you have to measure your urine out put to ensure your kidneys are working properly and to prevent kidney failure. So imagine being hooked up to an IV pole with multiple lines and having to get up every 20- 30 minutes to use the bathroom and measure it. Annoying to say the least. 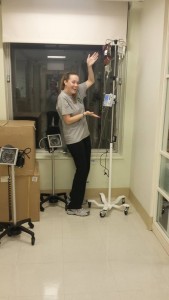 Along with chemo comes crappy side effects. I was typically nauseous the first two or three days, only once did I get sick. Constipation is also a problem. You HAVE to stay hydrated and on top of that because you will be miserable. I know from experience. It can be awful and truly painful. You'll have a bag full of pills, some prescription and others OTC. You'll feel like a mini pharmacy or as if you're doing something illegal. I look at my "pill bag" and there's Percocet, Vicodin (from surgery, liver biopsy and port being placed), two kinds of anti-nausea meds, Immodium, Colace, Tylenol, Nexium and I'm sure other stuff. You never know what you will now. Today tough, I take nothing except for the occasional headaches I get.

Please feel free to leave a comment. I will do my best to answer any questions. I'm not claiming to be a doctor but the world of Cholangio and chemo is a difficult one. So I can help someone navigate it, I will.