After cholangiocarcinoma is found and staged, your cancer care team will discuss your treatment options with you. It is important for you to take time and think about your choices. The treatment of cholangiocarcinoma depends on the size and location of the tumor, whether your cancer has spread, your overall health, anticipated side effects, and the chance of curing the disease, extending life or relieving symptoms.

It is critical to seek a second opinion, particularly for an uncommon cancer like cholangiocarcinoma. A second opinion can provide more information and help you feel more confident about your chosen treatment plan.

In many cases, a team of doctors including a surgical oncologist, medical oncologist, radiation oncologist, interventional radiologist, gastroenterologist and hepatologist will work with the patient to determine the best treatment plan. There are various treatment options for cholangiocarcinoma including surgery, radiation therapy, locoregional therapies, chemotherapy, targeted therapy, immunotherapy, or palliative therapy. The most sought after treatment for cholangiocarcinoma is surgery. 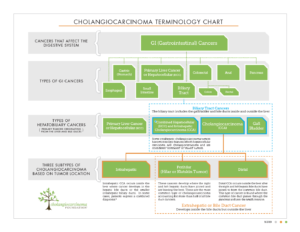 Surgery for cholangiocarcinoma is a complex operation that depend on tumor location and extension (if the tumor has grown through the layers of the tissue in which it started) and should be done by an experienced surgeon working at a major medical center whenever possible. There are 2 general types of surgical treatment for cholangiocarcinoma — potentially curative surgery and palliative surgery.

This is used when imaging tests indicate a good chance that the surgeon may be able to remove all of the cancer. Doctors may use the term resectable to describe cancers they believe can be removed completely (by potentially curative surgery) and unresectable to describe those they think have spread too far or are in too difficult a place to be entirely removed by surgery. Unfortunately, only a small portion of bile duct cancers are resectable at the time they are first found.

For resectable cancers, the type of operation depends on the cancer location

Liver transplantation for unresectable cancers: The American Association for the Study of Liver disease Guidelines recommends that potential transplant candidates should be expeditiously referred to major cancer centers that have established protocols for oncologic assessment and treatment approved by United Network for Organ Sharing (UNOS).

For some people with early stage unresectable intrahepatic or perihilar bile duct cancers, removing the liver and bile ducts and then transplanting a donor liver may be an option. In some cases, it might even cure the cancer.

For those who are eligible for a transplant there are some obstacles including:

To overcome these obstacles, patients have two options:

Possible risks and side effects: Like other surgeries for bile duct cancer, a liver transplant is a major operation with potential risks (bleeding, infection, complications from anesthesia, etc.). But there are also some additional risks after this surgery. People who get a liver transplant have to be given drugs to help suppress their immune system and prevent them from rejecting the new organ. These drugs have their own risks and side effects, especially the risk of getting serious infections. Some of the drugs used to prevent rejection can also cause high blood pressure, high cholesterol, and diabetes, can weaken the bones and kidneys, and can lead to the development of another cancer. After a liver transplant, regular blood tests are important to check for signs of rejection. Sometimes liver biopsies are also taken to see if rejection is occurring and if the anti-rejection medicines need to be changed.

This may be performed to relieve symptoms or treat (or even prevent) complications, such as blockage of the bile ducts. This type of surgery is performed when the tumor is too widespread to be completely removed. Palliative surgery is not expected to cure the cancer, but it can sometimes help someone feel better and sometimes can even help them live longer. Palliative surgery includes biliary bypass or inserting biliary stent

This is a treatment with high-energy rays or particles that destroy cancer cells.

Interventional Radiologist are responsible for treating patients with various loco-regional therapy approaches which include:

Cryoablation is similar to RFA in that the energy is delivered directly into the tumor by a probe that is inserted through the skin. But rather than killing the tumor with heat, cryoablation uses an extremely cold gas to freeze it. This technique has been used for many years by surgeons in the operating room, but in the last few years, the needles have become small enough to be used by interventional radiologists through a small nick in the skin, without the need for an operation. The “ice ball” that is created around the needle grows in size and destroys the frozen tumor cells.

For this technique, a light-activated drug is injected into a vein. A few days later, an endoscope (a long, flexible tube that can be used to look inside the body) is passed down the throat and into the bile duct. A special red light on the end of the endoscope is aimed at the tumor, causing the cells to die. The combination of PDT and stenting can help patients with cholangiocarcinoma whose tumors aren’t resectable live longer.

Chemotherapy (chemo) is anti-cancer drugs given through a vein or by mouth. These drugs enter the bloodstream and reach all areas of your body, making this treatment useful in some cancers that have spread to organs beyond the bile ducts. Because the drugs reach all the areas of the body, this is known as a systemic treatment.

Unfortunately, chemo has not been very effective against bile duct cancer, so its use has been somewhat limited. Uses of chemotherapy include:

Doctors give chemo in cycles, with each period of treatment followed by a rest period to give your body time to recover. Chemo cycles generally last about 3 to 4 weeks. Chemo is often not recommended if you are in poor health, but advanced age by itself is not a barrier to getting chemotherapy.

Chemo drugs work by attacking and killing cancer cells in your body that are dividing quickly. However, other cells in your body, such as those in the bone marrow, the lining of the mouth and intestines, and hair follicles, also divide quickly. These cells can be affected by chemo, which can lead to side effects. The side effects of chemo depend on the type and dose of drugs given and the length of time they are taken. These side effects can include:

These side effects are usually short-term and go away after treatment is finished. There are often ways to lessen these side effects. For example, drugs can be given to help prevent or reduce nausea and vomiting. Be sure to ask your doctor or nurse about medicine to help reduce side effects, and let him or her know when you do have side effects so they can be managed effectively.

As researchers have learned more about the gene and protein changes in cells that cause cancer, they've developed newer drugs known as Targeted Therapy to specifically target these changes. Targeted therapies more precisely identify and attack cancer cells when compared to chemotherapy. They sometimes work when standard chemo drugs don’t, and they often have different (and less severe) side effects. They can be used either along with chemo or by themselves. Targeted therapy is used to treat many different kinds of cancer. These drugs are being researched to see if they can help treat cholangiocarcinoma.

Three drugs have been approved by the Food and Drug administration (FDA) for cholangiocarcinoma including:

Many other targeted therapy drugs are available to patients through clinical trials.

For up to date information on immunotherapy, visit The American Cancer Society's Page on Immunotherapy.

If you have a high tumor mutation burden, high levels of microsatellite instability (MSI-H) or mismatch repair deficiency (dMMR), you should consider immunotherapy as a possible treatment. Microsatellite instability and mismatch repair deficiency are types of genetic changes to a cell that interfere with its ability to repair itself. This can lead to cancer cells that are very different from normal cells, which can make them more "visible" to the body's immune system.

This is treatment given to help control or reduce symptoms caused by advanced cholangiocarcinoma. It is not meant to be a curative treatment. If your cancer has spread too far to be completely removed by surgery, doctors may focus on palliative surgery or palliative radiotherapy, as well as other palliative symptomatic therapies. Because these cancers tend to advance quickly, doctors try to use palliative therapies that are less likely to affect your quality of life, when possible.

A particularly painful complication of cancer is when the disease spreads (metastasizes) to bones. In a technique called transcatheter embolization, interventional radiologists inject tiny particles, the size of grains of sand, through a catheter and into the artery that supplies blood to the tumor. The particles cause clotting that decreases the tumor’s blood supply, reducing pain and decreasing the likelihood of bone fracture.

After cholangiocarcinoma is found and staged, your cancer care team will discuss your treatment options with you. It is important for you to take time and think about your choices. In choosing a treatment plan, there are some factors to consider:

The location and extent of the cancer

Whether the cancer is resectable (removable by surgery)

The likely side effects of treatment

The chances of curing the disease, extending life, or relieving symptoms

It is critical to seek a second opinion, particularly for an uncommon cancer like cholangiocarcinoma. A second opinion can provide more information and help you feel more confident about your chosen treatment plan.

Get your free care kit and important information you'll need for your cholangiocarcinoma journey.