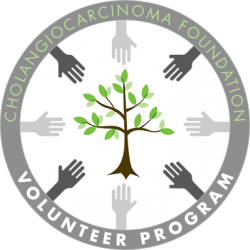 Rob’s father, Ed Howard, was diagnosed with cholangiocarcinoma at the height of the pandemic. The pandemic delayed the already difficult road to diagnosis. Upon Ed’s diagnosis, Rob began to educate himself. Amidst search results that terrified him, he found the Foundation. Rob quickly tapped into the resources the Foundation offers, which also gave him hope and comfort. He attended the caregiver support group and virtually attended the 9th Annual Conference. He received mentorship from CholangioConnect Director Patty Maxin. Rob shared that these resources were particularly vital to him as his dad’s advocate. He also shared that having the support of a mentor allowed him to be strong for his father.

The first Moving for the Cure campaign took place two months after Ed’s diagnosis. An avid runner, Rob signed up to complete a half marathon from his sister’s house to his parents’ house. Many people in Rob’s life had yet to learn of his father’s diagnosis. Participating in Moving for the Cure allowed Rob to share with others what his family was facing. Rob was overwhelmed by the response he received. In addition to an outpouring of support, Rob raised more than $6,000 for the Foundation. Rob’s partner, Rafael, was an integral part of the half marathon. Rafael biked to multiple spots along Rob’s route, giving him encouragement and documenting the journey. Rob’s family joined him for the last part of his run, and they finished the marathon together.

Tragically, Ed Howard passed in October of 2020. Before his passing, he celebrated 51 years of marriage with his wife, Anna Marie Howard. Rob knew he wanted to continue to be a part of the Foundation and its work. He gave himself time and space to grieve the loss of his father and celebrate his legacy. Six months ago, Rob shared that he was ready to serve as a CholangioConnect caregiver mentor. Soon thereafter, he was connected with his first mentee. The Foundation is deeply grateful that Rob shares so much of his heart with the CCF community.

Purpose: CholangioConnect Mentors offer encouragement. Mentors help others through difficult periods of diagnosis, treatment, and when needed, palliative care which can be extremely stressful and confusing. Mentors are cholangiocarcinoma survivors, patients, caregivers, family members or friends of cholangiocarcinoma patients. The service is free and is intended to offer support, not to give medical advice or recommendations. Any information shared between mentors and patients concerning treatments, medications or therapies should be discussed with a physician.

Qualifications: High levels of compassion, diplomacy, integrity, and initiative. Strong communication and organizational skills a plus.

Learn more about our CholangioConnect Program

Qualifications: Initiative, dependability, and organizational skills a plus.

Purpose: Fundraisers organize activities to raise money or otherwise solicit and gather cash or in-kind donations or other gifts for the Foundation.

Qualifications: High level of diplomacy, integrity and initiative. Ability to build effective relationship networks with a diverse variety of people (inside and outside the Foundation). Familiarity with various social media platforms and high visibility a plus.

Purpose: Discussion Board Moderators facilitate discussions where users may exchange information, opinions, thoughts or theories in an atmosphere of mutual respect.

Qualifications: Experience as a cholangiocarcinoma patient, caregiver or family member, strong communication and writing skills a plus.

Qualifications: Basic knowledge of computer and data entry, comfortable searching the internet, with familiarity in Excel and database management a plus. Pleasant manner, problem-solving ability, and dependability.

Qualifications: Pleasant manner, energetic, and problem-solving skills a plus.

Apply to be a Volunteer

If you have any questions regarding the volunteer program, please contact Claire Condrey, Volunteer Coordinator, at claire.condrey@cholnagiocarcinoma.org