Sarah Pieh was born in Adrian, Michigan on New Year’s Eve 1976. From a young age Sarah had a distinctive love of reading, traveling, and exploring new things. After graduating Cum Laude from Northwestern University in 1999, Sarah worked in Chicago for McMaster-Carr Industrial Supply before moving to Hawaii in 2001. There she met her devoted husband Andy Macias, a naval officer stationed in Honolulu. Together, Andy and Sarah enjoyed an active military lifestyle living in Maryland, Japan, California, Brazil, and Miami. Sarah was driven to expand her personal boundaries. Sarah joined the U.S. State Department in 2008. She successfully completed a rigorous training program, and in 2009 earned her qualification as both a federal law enforcement officer and a Special Agent with the Bureau of Diplomatic Security. Sarah’s assignments were in Washington, DC and Beijing, China. A quick read and an exceptional learner Sarah spoke English, Spanish, Portuguese, and Mandarin Chinese. In 2010 Andy retired from the Navy as a Lieutenant Commander. In 2012 their beautiful son Hank Macias was born. Together the three loved traveling together throughout the U.S. and the world. Sarah passed away on October 12, 2015 in Chagrin Falls, Ohio from complications related to cholangiocarcinoma. She was 38 years old. Sarah herself is now memorialized on the Diplomatic Security Service’s Wall of Fame.

When was she diagnosed with CCA?

Sarah was diagnosed with intrahepatic cholangiocarcinoma in January 2015 while assigned as Assistant Regional Security Officer, U.S. Embassy, Beijing, China. Within three days of being diagnosed with CCA we were medically evacuated from China and arrived in Cleveland, OH on Feb 1, 2015. The U.S. State Department left it to our discretion where Sarah should begin treatment. Not knowing anything about liver cancer and with only three days to conduct research on treatment facilities, we elected for Sarah to get treated at the Cleveland Clinic. The Cleveland Clinic liver tumor board decided to attempt a resection to remove the 23cm tumor but surgery was abandoned during the procedure once it was discovered cancer had infected more of her liver than originally suspected. The next option was to undergo Therasphere Y90 transarterial radioembolization but that too was abandoned because Sarah’s liver was already indicating deteriorating performance. Our only remaining option was to begin chemotherapy treatment with Sarah receiving Gemcitine and Oxaliplatin (GEMOX).

Was she ever been enrolled in a clinical trial? If so, what, where and when?

Why did you and she decide to participate in a clinical trial?

Sarah’s cancer remained stable after two GEMOX cycles but the side effects soon became intolerable. The chemotherapy treatment was also exacerbating her already poor liver performance to the point she was not a viable candidate for any clinical trial. In addition to the immense pain she was experiencing in her abdomen, Sarah also began to undergo weekly paracentesis to drain the 5-7L of ascites she was accumulating. Between the chemotherapy side effects, the drugs she was taking to treat the side effects and the discomfort of the ascites, Sarah’s quality of life was quickly deteriorating. All the research I was conducting repeatedly indicated chemotherapy was not going to be a long-term solution. Sarah was confined to either a bed or a wheelchair so we had to look for more options and we had to act fast. Upon the return of the Foundation Medicine genomic testing we began the lengthy process of finding a trial that could exploit the BRAF V600E gene mutation her tumor expressed however, she was still well outside the liver performance criteria to be considered for just about any clinical trial. We decided to postpone chemotherapy and noticed her liver performance began to improve drastically – so drastic, she was now inside the liver performance criteria and we successfully enrolled her into a BRAF clinical trial at MD Anderson Cancer Center in Houston. Within 2 ½ months of diagnosis she started the trial and began receiving the MEK inhibitors Dabrafenib and Trametinib.

What was the biggest barrier to participation?

There were several barriers to participation but probably the biggest one was the inability to contact and dialogue with another patient already enrolled in the trial. As a caregiver, I wanted to have an idea of what was ahead of us so perhaps we could learn from someone else’s experience.  We were left to spend countless hours searching message boards, Facebook posts, and conducting general online searches for informal discussions that gave us even the smallest bits of information of what we could expect from the trial. I was eventually successful in finding a patient who had participated in the BRAF trial and was able to learn so much about what to expect. Prior to having that dialogue, we felt like we were headed into a black hole. I’m not sure we would have participated in the trial without this prior knowledge. Common among cholangiocarcinoma patients and caregivers is a feeling of frustration and the perception that the medical community is not hearing their voice. A platform for peer reviews would empower patients to harness the collective knowledge of the cholangiocarcinoma community so they can better investigate a particular trial and have a voice in their own treatment. Patients trust other patients – very similar to the way each of us respond to customer reviews about a consumer product rather than blindly trust an advertisement. It is not uncommon for information published on clinical trial announcements to be erroneous. Published phone numbers, email addresses, and names of trial administrators are often outdated or incorrect and present a huge dilemma for patients attempting to enroll. Further complicating matters are the additional screening requirements patients only find out about after they have successfully contacted trial administrators. Oftentimes hospitals and research facilities will not disclose information until after a patient makes an appointment and formally registers into their system, perhaps to increase the likelihood the patient will receive care there. The task of qualifying the information published on clinical trial announcements resides on the shoulders of the patient when it should be the responsibility of the institution sponsoring the trial. It takes lots of time, persistence and thick skin to get questions answered. Cancer patients are just trying to make it through the day and can’t afford to be expending energy fighting bureaucratic red tape. Perhaps it’s not necessarily a barrier but it is incredibly difficult to find oncologists who are willing to help patients and caregivers develop a clinical trial strategy that prioritizes three or four clinical trials instead of relying on just one. There needs to be alternative options ready to execute should a clinical trial not be effective. The worst time to be looking for a clinical trial is when you absolutely need it and it’s your only remaining option.

What is the biggest misconception about participation in a clinical trial?

Clinical trials are the only way to find a cure and we do not know which trials will succeed and which will not. Perhaps it’s not a misconception but it’s still important to remain cognizant that the perspectives of the patient and those of the researcher are not necessarily aligned 100% of the time. The patient’s primary concern is treatment for their disease and improving their quality of life if not eradicating the cancer altogether. Patients are usually happy to contribute to scientific research but it’s not their immediate focus – treatment is. Through the lens of a scientific research, doctors view clinical trials as a means to collect data that can determine whether new treatments are safe and effective and offer the potential to work better than existing protocols. Researchers hope trials offer some clinical benefit to the patient but accurate data collection is their priority.

If you could tell the world one thing about your experience with clinical trials, it would be:

I think it’s important to keep in mind that clinical trial success is relative. My wife’s clinical trial did not save her life and she passed away once the drugs were no longer effective. However, I still consider the trial a success because it added six months to her life – six, high-quality months. The MEK inhibitors were incredibly effective shrinking her tumor size by more than 50%. The pain subsided, her liver performance increased, she was producing less and less ascites, her energy returned, she went back to work, was once again able to be a mother to our son, began traveling on her own for her monthly check ups at MD Anderson. For the first time since she was diagnosed we actually shared moments of joy and hope. I am forever grateful to the clinical trial team because these things would never have been possible had she remained solely on chemotherapy. Many unresectable patients have a similar experience. The trauma of the diagnosis is followed by the relative calm of tumors responding to Gem/Cis. This calm is then followed by the trauma and panic of progression. What patients may not realize is that preparing to participate in a clinical trial takes time and effort. Waiting until progression to think about a clinical trial likely means not being able to benefit from a clinical trial. Every patient should have a treatment plan. Moreover, patients should consider a clinical trial as an appropriate second line therapy option. Key questions for clinical trial participation planning: 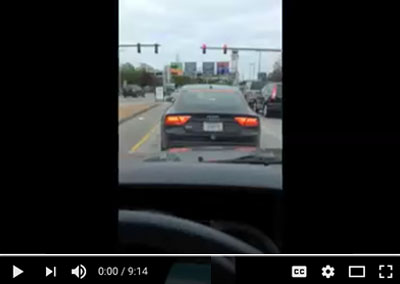 A trip to MD Anderson in 9 minutes