What is cholangiocarcinoma (bile duct cancer)? 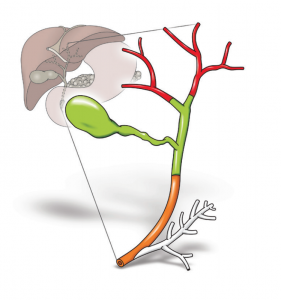 Different parts of the bile duct system have different names. In the liver it begins as many tiny tubes (ductules) where bile collects from the liver cells. The ductules come together to form small ducts, which then merge into larger ducts and eventually the left and right hepatic ducts. The ducts within the liver are called intrahepatic bile ducts. These ducts exit from the liver and join to form the common hepatic duct at the hilum.

About one-third of the way along the length of the bile duct, the gallbladder (a small organ that stores bile) attaches by a small duct called the cystic duct. The combined duct is called the common bile duct. The common bile duct passes through part of the pancreas before it empties into the first part of the small intestine (the duodenum), next to where the pancreatic duct also enters the small intestine.

Cancers can develop in any part of the bile duct and, based on their location, are classified into 3 types:

What is Perihilar (Hilar or Klatskin Tumor) Cholangiocarcinoma?
These cancers develop where the right and left hepatic ducts have joined and are leaving the liver. These are the most common type of cholangiocarcinoma accounting for more than half of all bile duct cancers.

What is Distal Cholangiocarcinoma?
Distal CCA occurs outside the liver after the right and left hepatic bile ducts have joined to form the common bile duct. This type of cancer is found where the common bile duct passes through the pancreas and into the small intestine. 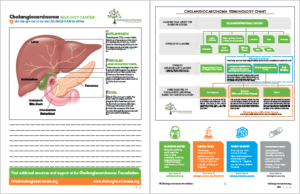 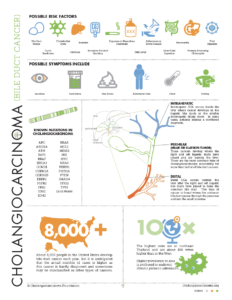 Get your free care kit and important information you'll need for your cholangiocarcinoma journey.