I have re-written the first sentence of post three times now. Why is it so hard to get what's in my head down to my fingers and to the keyboard? *sigh*

Now imagine yourself waking up, in a dimly lit room and not knowing where you were. Imagine your eyes being so swollen that you could barely see. Imagine seeing blurs of people standing at the foot of your bed and hearing them talking about you. You can't respond. You can't see. You can't move. That's what it was like for me coming out of surgery. At least the first memory I have.

Even writing that last paragraph was incredibly hard because it took me back to that place and time but I feel that's important. This whole journey has been traumatic to be honest with you but I think it's important to feel the emotions. To let your mind go there but come back.

I remember being so irritated by the doctors, nurses and residents standing outside of my room in the ICU discussing my case. I wanted to yell, "Hey! I'm here. I hear you! Talk to me and not about me."

I also remember them making me get up and walk 24 hours after my surgery (I think. I'll have to fact check that with my parents.) I thought that was a terrible idea but it was necessary. I walked for what felt like a hundred miles but was probably only a few feet. I used a walker and had someone on each side of me, along with my dad and husband. Someone followed behind with a wheelchair for when I needed a break. I got so mad and frustrated with everyone telling me to keep going. For telling me to keep my head up and eyes open. "Hey everybody, you try having your stomach cut open and insides taken out then stapled back up and walk 24 hours later!" Mind you I was also on quite a few meds. So of course I didn't say that but wanted to. 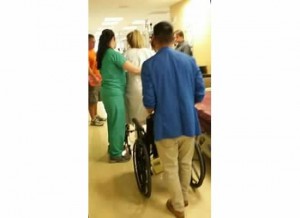 I remember my brother and sister-in-law coming to visit me. I don't remember too much about it except seeing my sister-in-law leaning against the sink and wondering to myself, 'Is she pregnant?' I could barely keep my eyes open but I could see her and you know what? I was right!

I remember having to switch beds and being wheeled through the halls and into the elevator. It was like a field trip. A much needed change of scenery. The room was a big open room with four beds but divided by curtains. I lucked out and got the corner with a window and an amazing view of the Hudson River. I could see New Jersey, my home state. 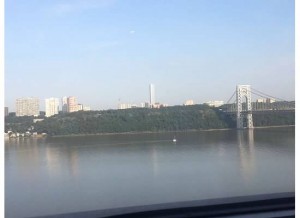 Those four days were hell! Here I am a young female in a room with four men twice my age with only a curtain separating us. The guy to my left always had tons of family around and they were loud. The elderly gentleman diagonal from me was extremely hard of hearing and also didn't speak English. So the nurses often had difficulty communicating with him and I felt so bad. The guy directly across from me the first two days was fine, didn't even know he was there. The last two days was absolutely terrible. That guy was very sick and on  dialysis. He tried with all he had to unplug himself and get up. He was loud, aggressive and argumentative with the nurses. There was also a language barrier. At one point there were several doctors and multiple nurses trying to get him to stay in bed. There was discussion about restraining him and strapping him to the bed. I was scared. Here I am laying in a terribly uncomfortable hospital bed barely able to move because I had 32 staples in my abdomen. Eventually a security guard sat at the foot of his bed and things calmed down around 3:00 am. I mean you don't really go to a hospital to sleep and rest. That'll never happen.

I know one thing's for sure, I wasn't prepared for that nor was I prepared for the recovery. With that said, all of my nurses at New York Presbyterian hospital were amazing. They don't get enough credit for what they do and deal with. Every single time I had to use the bathroom, they would have to come in. They would unhook and unplug all the cords attached to me, which was a lot. They had to take the compression cuffs (I think that's what they're called) of my legs and put back on. They had to help me sit up. Help me step a few feet to the commode and other things.

Nothing makes you feel completely helpless then recovering from major surgery. I needed assistance going to the bathroom, bathing, moving, walking, eating....you name it. Below is a picture of me, my husband and dad pushing my son in the stroller. Sorry it's blurry. 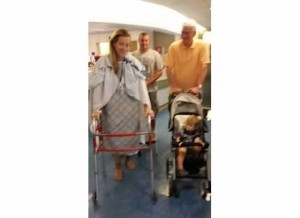 On August 11, 2014, my surgeon came into see me. He asked if I wanted to go home. Of course!!! He said I could and that's when he mentioned chemo. Wait...what? I was under the impression that they got it all and I could go about my life. After talking to him and my oncologist later, it made complete sense and knowing what I know now, I'm glad I did. I had clear margins and clear lymph nodes but based on my age and good health, it was recommended. I was all for it. I don't want to go through this again.

I did 6 months of Gemcitabine and Cisplatin. I'll get into that another time. It's bed time for this girl.