It’s natural for cancer patients to, at some point in their journey, indulge their curiosity.  When you are diagnosed with a disease as rare as cholangiocarcinoma, one of the first questions that comes to mind is: why?  A person wonders if maybe they have a genetic predisposition, or maybe they’ve unknowingly encountered carcinogens that altered something in their system at a cellular level.  Regardless the reason though, preventative attempts become less of a priority.  When cancer is present, the gears shift, and we head in a new direction.

For Helen Scott, a healthy, happy, young mother, there was no obvious cause for her disease.  She doesn’t dwell on that fact though, it’s what she chose after that is both interesting and inspiring.  During our almost hour and a half chat, I could feel her energy through the phone despite half a world of distance between us and a combative phone connection.  She’s real, she’s a fighter, and while she is ravenous for information, she somehow finds balance.  As with every patient perspective, I learned from Helen, but what I loved most was the personality that radiated through the phone.  Hers is a story of changing priorities and perspective, and I’m grateful for the time she spent with me to share it.

In 2010, Helen was a relative newlywed, 5 months pregnant and 12 years into her banking career in London.  Her husband was also in the profession, and when their career paths converged in a serendipitous way in the direction of Hong Kong, they deemed the opportunity too good to pass up.  She delivered her first child in Hong Kong, and when a second soon followed, she decided it was time to step away from her career in banking and pursue her passion: food.

She found a niche in Hong Kong culture blogging about where to source high quality, healthy produce, poultry, and fish, and she began to branch out into posting healthy recipes and restaurant reviews.  Hew growing network of contacts put her in the path of a similarly minded woman, and together they embarked on a venture importing & distributing sustainable seafood and grass fed meat from New Zealand into Hong Kong. 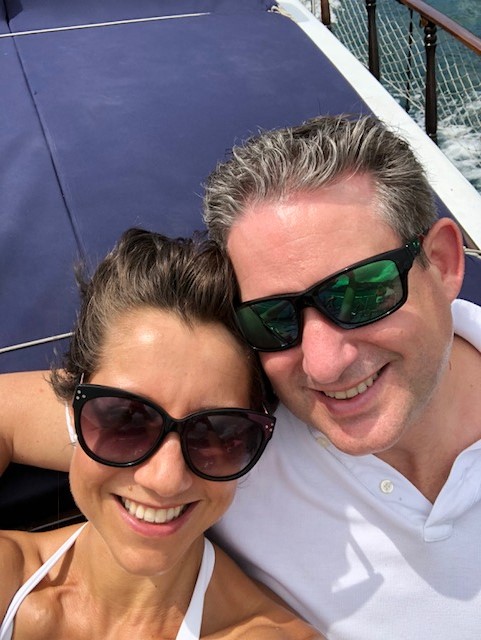 Helen pictured with her husband, Andy.

After the birth of her third child in 2016, Helen was flying high.  She had a beautiful family, growing business, and exciting network of new friends a world away from home.  In a return to routine, she resumed a running schedule that took her up a hill behind her home, and about four months post partem she began to feel pain in her lower back.  She at first assumed that the pain was her body readjusting to the rigorous exercise, but when it persisted she decided to check with her doctor.  In May he ordered an MRI of her pelvis to search for what he suspected would be weak ligaments post pregnancy, but to his surprise the imaging instead revealed a mass.  Helen’s family doctor referred her to her gynecologist to investigate what he believed was a benign cyst on her ovary.

A follow up ultrasound had her heading to a surgeon who echoed the assumption that the growth was benign but thought it in Helen’s best interest to take it out and confirm.  She went into surgery expecting unremarkable results, but as soon as she recovered from the anesthesia, the doctor came to her to break the news.  The 10 cm mass they had removed was malignant, and instead of being attached to her ovary, it had grown out from her retro peritoneum.

Unsure of the primary, the surgeon ordered a PET scan that revealed 23 areas of SUV uptake emanating from 15 masses in Helen’s lungs, 5 in her liver, and 3 in the bones of her lower back.  Including the mass they had removed, Helen had at a minimum, 24 areas of suspected disease throughout her body.  They turned to her blood work for a possible explanation, and when they saw that her CEA and CA19.9 tumor markers were highly elevated, her doctor suggested that she might have cholangiocarcinoma.

Anxious for another opinion, Helen flew to The Royal Marsden Hospital in London where further analysis of the malignant tissue that had been removed supported a guess that the primary was gastrointestinal.

The initial diagnosis devastated Helen and her family, but she very quickly went into fact-finding mode.  She connected her London doctors with her oncologist in Hong Kong, and together they devised a plan to attack Helen’s disease with an aggressive course of FOLFIRINOX chemo.  While this deviates from the cholangiocarcinoma standard of care, Helen’s doctors felt it was the best option to address both bile duct cancer and the remote possibility that her disease originated in another area of her abdomen.  She was also in fantastic health, so they believed she was strong enough to tolerate the therapy through the course necessary to have the intended effect. 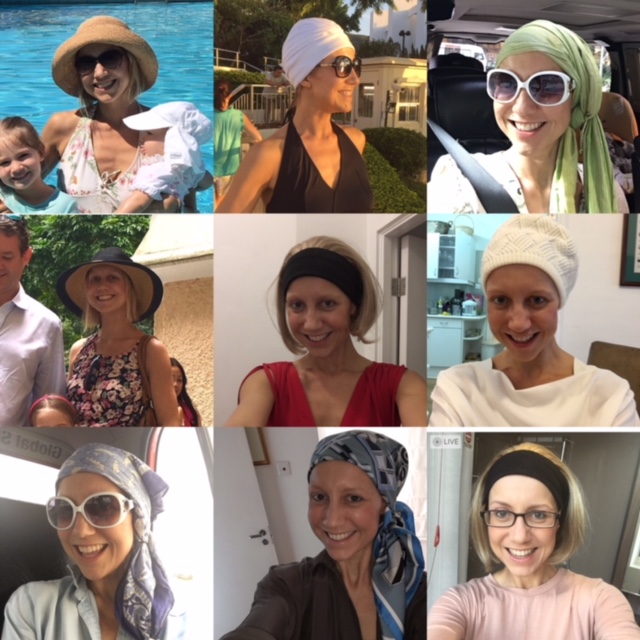 After her first treatment, Helen’s tumor markers decreased by 10%, a number that the doctors said was encouraging, but disheartened Helen who was anxious for bigger gains.  To aid her body in the fight, she delved deep into complementary lifestyle changes ranging from supplements to phototherapy treatments, and as she progressed through additional chemo, the decrease became more pronounced, first to half the original markers, then a quarter, then an eighth.  By her third to last treatment, the only active cancer registering in Helen’s system was a tumor in her liver that had shrunk to just 2 cm.

Bolstered by the response, Helen’s doctors recommended radio frequency ablation in London to address what remained of her final tumor, and after a three week stay in her home town, Helen was declared NED (no evidence of disease) and headed back to Hong Kong. 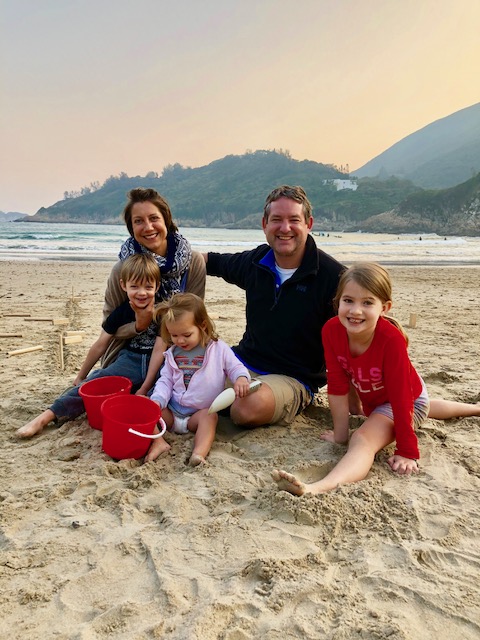 Helen and Andy with their three children

In May of 2017, after around five months without evident cancer in her system, Helen began to feel a familiar pain in her lower back.  Investigative blood work revealed a slight rise in her tumor markers, and a follow up scan in July confirmed that the cancer returned (or perhaps never totally left) to the original concerning spot in her sacrum bone.  The doctors recommended radiation that she immediately began locally in Hong Kong, and after only a week of lowered tumor markers Helen knew that the treatment had not done its job.

In mid-December, she went in for a second radiation, SBRT (aka Cyberknife), and while the pain was slightly eased, the stubborn tumor again began to fuel a rise in markers indicating that it was active.  Her most recent scan only a week ago confirmed slight growth, however she is otherwise well, and aside from the discomfort, Helen isn’t battling strong symptoms.

Her doctors are divided on which therapy to pursue, with one in favor of Gemzar, Abraxane, and Avastin, while the other would like to return to the FOLFIRINOX that she had such a positive response to.  Helen, for her part, continues to mine any and all research around her disease, knowing that chemo will buy her time but presents little chance of a cure.

When she was first diagnosed, Helen forced a massive shift in her priorities.  While work had already become less of a priority, she decided it was time to step away to focus on her family.  A social creature, she also found herself withdrawing slightly from her friend group and refocusing that energy on wellness.  She set rules for herself around getting enough sleep and limiting stress, and she adhered to as many lifestyle changes as were feasible to help her body heal. 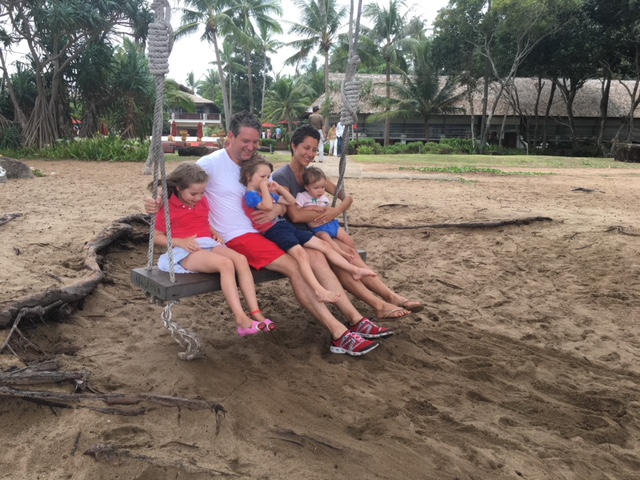 She also dove headfirst into any literature she could find on cholangiocarcinoma, and while a trip to Salt Lake was not logistically possible last year, she decided to travel to Bangkok and attend the Cholangioarcinoma Foundation’s first Pan-Asian conference.  Being the only patient, she had the opportunity to network with some of the world’s most talented medical professionals who were delighted to hear a patient’s perspective.

Helen laughed when I asked if she had any advice for newly diagnosed patients, she said she was trying to think of a response that wasn’t also a cliché.  There do seem to be common threads of insight, but they always take on new life with the perspective of the patient.  Some of the thoughts she responded with weave nicely into messages we’ve heard before, and some were all Helen: beautiful, funny, and insightful.

I’m going to take a liberty here and add to Helen’s list by recommending you also check out her website: www.mangomenus.com.  Not only has she posted great original content around her passion, food, but she also has a section dedicated to her personal health journey that embellishes upon what is posted here and also details the complementary changes she has incorporated into her treatment plan.

When she talks about her cancer, Helen is realistic on the unlikelihood of a cure, but she is equally opposed to any terminal allusions.  In her words, her cancer is “incurable, but manageable”.  While her doctors are steering the ship, Helen is doing everything in her power to help manage her disease.  Hers is a path marked by choices, empowerment, and gratitude.  It’s the gratitude that manifests most often and in interesting ways.  She said she reflects on how grateful she is every day, even in little things like choosing to take the stairs rather than an elevator.  I could hear her smile through the phone as she described the habit and said that it brings her joy.  When I asked why, she said it reminds her to be grateful, “Because I can.”

Helen’s life has been touched by clouds, but she has a knack for finding the silver linings.

Stay tuned for our next post on February 13th debriefing the 2018 Cholangiocarcinoma Foundation Conference!