John and Jill Blonder were married for 34 years. They were preparing for retirement at their home in Dandridge, Tennessee when John discovered he had cholangiocarcinoma. He fought hard but died 5 months after the diagnosis. “That’s what makes this bile duct cancer so insidious.  By the time anyone realizes they have it, it is most often too late.” Jill Blonder explained. “In John’s memory, I want to raise awareness and fund research.  I also want at long last (since Covid robbed all his family and friends of the opportunity) to memorialize him in a way that would make him happy. So, I have decided to combine the two – fundraising and memorializing.”

On Saturday, June 5, Jill and friends held the John Blonder Memorial Ride starting at Angelo’s at the Point in Dandridge, Tennessee. “We are enthusiastic motorcycle riders, and we love to explore the back roads, mountains, rivers, and lakes of beautiful East Tennessee, our home for the past twelve years.” Jill shared “Anyone with a set of wheels is invited.” Many fiends came out and supported the event. Over 50 riders were on the road at any given point. The day was “magical”. Jill said of the fundraiser “The original target of $3,400 was how many years John and I had been together (34 years), but we hit that so quickly, I raised it to $5200, 1952 being the year John was born.  Family and friends, old and new, and many were friends, co-workers, acquaintances we hadn't seen in years, were so unbelievably generous and supportive. I knew John was loved and highly regarded, but DAMN!  I cry a lot when I think about the response to him!”

In the end, Jill raised an amazing $6,646.64 – almost twice the amount of her original goal. “I think it's time to give the victims of cholangio a fighting chance, but that can't happen if we don't raise awareness. That is now what keeps me going!! 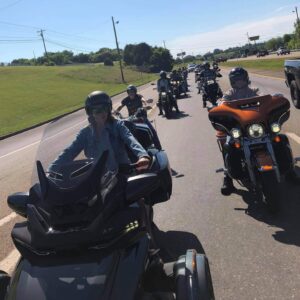 “We are enthusiastic motorcycle riders, and we love to explore the back roads, mountains, rivers, and lakes of beautiful East Tennessee, our home for the past twelve years.”