It started as an itch. Thinking it was just dry skin, I began applying lotion more often. There was no redness or swelling, yet the itching intensified with every passing day. I itched everywhere - my arms, my legs, my hands, my feet, my chest. It would wake me in the middle of the night, and I’d cover myself with ice packs, desperate to get a few more hours of sleep.

I kept thinking this was strange but harmless. Plus, I had bigger things on my mind. I had just married my best friend and was busy planning our honeymoon. Little did I know, a month after our wedding, I would be admitted to the ER with unexplainable jaundice, nausea, pain, and itching. And a week later, I would receive news I never imagined I’d hear.

At 38, I was diagnosed with cholangiocarcinoma.

I soon learned I had a rare and deadly cancer most common in people over the age of 65. And the prognosis for patients is poor, with a five-year survival rate of 10%. I tried to remind myself that averages do not determine individual outcomes, but it was hard to see past the statistics.

I was young, healthy, and fit, and I couldn’t understand why this was happening. But I didn’t have time to make sense of things. Instead, I was focused on finding a surgeon. Based on the tumor’s location, I needed to have a complex operation known as a Whipple procedure. It involves removing the bile duct, gallbladder, and part of the pancreas, stomach, and small intestine. Since it reconstructs a large part of the gastrointestinal tract, it’s considered one of the most demanding and risky operations for surgeons and patients. As if getting cancer weren’t enough to deal with, having a Whipple procedure came with a completely separate set of challenges and fears.

In light of all this, it’s unsurprising I was holding out hope, however small, that this was all a big mistake. Through the help of a friend, I obtained a second opinion from a well-respected surgeon nearby who agreed with the diagnosis and surgical plan. It wasn't what I wanted to hear, but it gave me comfort knowing the experts agreed, and I started coming to terms with what I had to do to survive.

The operation lasted six hours, and I spent five days in the hospital. When I was discharged, I could barely walk or eat. Because the Whipple drastically altered my digestive system, I needed to train my new system on how to digest food. Many foods I used to enjoy, even in small amounts, would make me sick. A bite of cheese or a cup of soymilk would ruin my day. Every day was an experiment, and failure meant hours lost waiting for the nausea to pass. Over several weeks, I forced myself to drink water and worked my way up from eating one ounce of food, to two, to four, and eventually, I could handle small meals again.

With the surgery behind me, my sole focus was recovering and regaining the weight and strength I had lost. But at the follow up appointment, my surgeon shared I had lymph node involvement and strongly recommended adjuvant chemotherapy. Chemo had been mentioned as a possibility, but now it was a reality. I soon realized my life would revolve around doctor’s appointments, blood tests, chemo, scans, anxiety, and fear. Afterwards, I walked out of the doctor’s office into the waiting room and cried into my husband’s arms.

Until this point, I had prided myself on being ambitious and goal-oriented. I had spent the majority of my adulthood in Manhattan climbing the corporate ladder, so I thought I was well-prepared to handle challenging situations. I could easily focus and execute on the immediate healthcare decisions I needed to make, but thinking beyond that felt pointless. The future that had once seemed infinite with possibilities - a new house, a new job, a child, maybe two - was gone. Instead it was shrouded in doom and uncertainty. I felt lost, and my thoughts would invariably go back to the scary statistics I’d found on the internet.

Instead of trying to “think positively” as many people suggested, I started making a mental list of everything I was about to lose: my weight, my hair, my fertility, my job, my social life, and my mind, as the chemo would make me foggy and slow. Time, which I used to take for granted, was now spent waiting - for doctors, for test results, for nausea to pass, for better days. Everyone around me was moving forward with their lives and mine was paused.

Despite my negative thoughts, I told everyone, “I’m doing ok! I’m eating more and getting outside!” But internally, I was struggling to make sense of what my life had become. I spent most of my days thinking about how long I had to live and how to express my love for those I cared about before it was too late. And I wasn’t the only one feeling this way.

My parents now ended most conversations with “I love you”. I always felt loved by them, but this was the first time as an adult I could remember them saying it out loud to me. My husband had taken time off work to be with me, and had also taken on the role of chef, nurse, and caregiver, often making sure I was getting enough nutrition and exercise. My phone was constantly lighting up with messages from friends and family asking the well-meaning but dreaded question, “How are you doing?”

I was moved by everyone’s support and encouragement, but I also felt a large amount of guilt. I felt guilty for the stress and worry this caused my family. I felt guilty for dominating our first year of marriage with my sickness. I felt guilty because even though my husband kept a calm demeanor, I knew he was also under immense stress. On top of the guilt, I also felt very alone. I didn’t want to burden anyone with the thoughts and fears I had running through my head. And while they would all say things to cheer me up, I couldn’t help but think they didn't understand what I was going through.

During this time, a social worker encouraged me to seek out a mentor through Imerman Angels, a non-profit organization that connects cancer patients with cancer survivors. I requested someone who had battled cholangiocarcinoma, who had had a Whipple procedure, and ideally was similar in age. It was through this match that I met my mentor, Tessa, who was volunteering with the CholangioConnect program and nearly 10 years younger than me. She shared her story of battling the disease during her senior year of college and enduring months of treatment while finishing school. She had just passed the 5-year milestone of being NED (no evidence of disease) and was about to start law school in the fall.

I left our initial conversation in awe of her strength and resilience. And even though Tessa hadn’t undergone a Whipple procedure, I could see myself in her. She was someone I could relate to and speak candidly with about my feelings. She was also a living and breathing example of someone who had defied the statistics and was continuing to live and thrive. I often thought the odds were against me; I couldn’t possibly be one of the lucky ones. I still don’t know if I will be, but Tessa gave me a reason to be hopeful.

Rather than allow this diagnosis to overcome my life, I started to find a way to accept it and slowly, I began to restore the life I had envisioned for my husband and me. We had moved to Seattle a year ago at that point because of our mutual love of the outdoors, and there was still much of the area we had yet to explore. So before I started chemo, I made a deal with myself to go out and explore as often as I could.

I spent the next six months exploring new parks, hiking trails, and islands, in and around the Pacific Northwest. The beauty and sounds of nature were restorative and helped distract me from feeling ill. Over time, my walks outside became shorter as chemo attacked both good and bad cells, but they held more and more meaning. This was time for me to be alone with my thoughts, to grieve, vent, and cry. Afterwards, I would feel better and lighter, and it’s during these times that I started to notice and appreciate the beauty in everything around me.

It’s been a year since my initial diagnosis, and my latest scans were clear. I’m grateful for reaching this milestone, but I’m still learning to live with a permanent sense of uncertainty. I try not to focus too far into the future and instead appreciate what I have in the present moment.

This experience has been hard, but I’ve learned how strong I can be. And I’ve learned to see the good in the everyday. Spending a few minutes every day to write down three things I’m grateful for helped get me through some of my toughest days. I started to look at every blue sky, every flitting hummingbird, every smile from a stranger as the gift that it is. By making a choice to see these gifts, hard days, average days, and days in between, started to feel brighter and fuller.

On a deeper level, I often think about how grateful I am for discovering the tumor early enough to operate; for the talented surgeons, oncologists, and nurses who took great care of me throughout months of treatment; for the outpouring of love and support from family and friends; and for my amazing husband who’s been by my side through everything. I would not be where I am today without all of them.

Now, my world is divided into “before” and “after”. Even with this dividing line, the good things in my life feel just as good as they did before – laughing with my husband, feeling the sun in my face, hugging my nephews, smelling fresh mountain air. A year ago, I thought a cancer diagnosis automatically meant a death sentence, but I now realize I’ve been given a second chance at life. It looks different from what I thought it would be, but that’s not necessarily a bad thing. It’s still a life worth living, and I’m determined to live it well.

I used to take time for granted - the days, the hours, the minutes. It’s only when your own mortality is staring back at you that you realize just how short life is. I’m now more aware of how I spend my time and try to use it wisely - with people I care about and doing things that bring me joy.

Grace lives in Seattle with her husband. She serves as a mentor with ChalangioConnect and is a research advocate for the Cholangiocarcinoma Foundation. 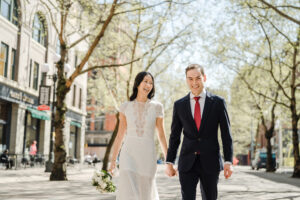 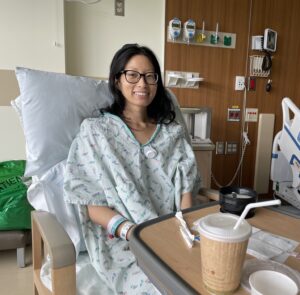 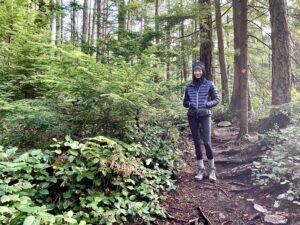 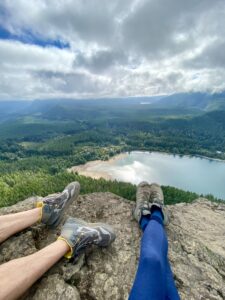 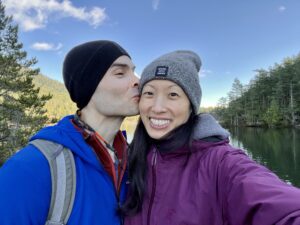 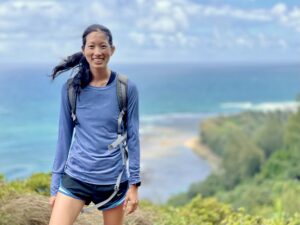