According to the U.S. Bureau of Labor Statistics, in 2008, healthcare positions accounted for 12% of all private-sector jobs, a number that has consistently been on the rise.(1) Included in this data were such vocations as pharmacists, physical therapists, dental hygienists, medical assistants, home health aides, etc. Many non-M.D. professionals within this population have had some organized biology education, however, as with many jobs, the farther we get from our schooling, the less we retain.

Even for those who have had formal, scientific education, many cancer research mechanisms are only vaguely familiar. For the rest of us, the science ascends to peaks that rise beyond our comprehension, and there typically isn’t incentive for lay people to immerse themselves in a discipline that takes many years of study and a certain brilliance to master.

A cancer diagnosis raises the stakes, though, and oftentimes either a patient or a member of their support system decides to attempt to climb that informational mountain. I am often amazed by the base of knowledge members of our community cultivate through the course of their treatment or time as caregivers. Instead of our prior hobbies, we devote most or all of our free time to sifting through publications relating to cholangiocarcinoma and doing our best to make sense of what we read.

Mouse models repeatedly surface in our search, and, in a simplistic way, they are what we think they are: using less complex organisms to observe tumor behavior and response to new treatments. This oversimplification does not do this critical research tool justice, and new, innovative approaches like Dr. Mohamed Abazeed’s work with mouse avatars, hold promise in the direction of truly personalized medicine.

I had a chance to interview Dr. Abazeed while I was at Cleveland Clinic late last fall to learn about his research and the use of mouse models in cancer study. The insight gained into this path to advancement and the novel ways his lab utilizes modeling is exciting and a little dizzying in its complexity. Thankfully Dr. Abazeed had a way of bringing science to my level, the result of which is today’s post.

Many posts and conversations around cholangiocarcinoma come back to a tumor’s genome. The emphasis for patients to get a molecular profile in their cancer journey arises early and often, and part of this stems from already identified targeted therapies. According to Dr. Abazeed, most of our understanding of the genetic landscape of cholangiocarcinoma is derived from large sequencing studies in Asia. While we are all genetically similar, the tumors derived from these unique populations with inherently distinct exposures are not genetically identical, and those differences might have therapeutic impact. Additionally, the causes of cholangiocarcinoma around the globe are sometimes specific to local environmental factors, the liver fluke in Southeast Asia being the best example of this diversity, which may also lead to higher patient responses to one type of therapy over another.

Scientists are thus faced with what Dr. Abazeed referred to as patient-to-patient genetic heterogeneity, each disease presentation ranging from somewhat different to dramatically disparate from a sister cholangiocarcinoma present in another patient. We also know from both scientific study and real-world examples that cancers adapt to treatments, as evidenced by anecdotes where a patient initially has a strong response to a therapy, but, at some point, treatment ceases to halt progression and disease advances.

Clinicians take these factors into account when designing treatment plans, but with such a small patient population and a markedly diverse disease, researchers are constantly looking for effective ways to study disease behavior before attempting potentially dangerous interventions in a patient population. This is where mouse modeling has resulted in advancement, but also poses scientific roadblocks.

Getting Down to Brass Tacks

The use of mice in both research and understanding DNA dates back to the early 1900s.(2)  In addition to factors like their availability, compact space needs, and ease of care, it was later discovered that mice are genetically similar to humans and are manipulatable at that level.  While the original research using mice were fairly basic, today’s research mouse population is incredibly controlled and expertly designed for the task at hand. The process of using mice to direct patient therapies does not begin with mice though, instead, it starts with the patients.

Cancers that are studied in labs represent specific cell lines that have been cultivated from actual patient tissue for research. Investigators focusing on specific genetic abnormalities can petition a number of tumor banks for samples to test experimental agents. As there is a biological difference between cells on slides and cells in vivo, mice serve as a potentially promising auxiliary host for human application.

As alluded to earlier, these aren’t just any mice. As with other complex organisms, mice benefit from standard biological process that purge foreign or damaged cells. Simply implanting a mouse with diseased tissue most often leads to rejection of the cancer and a failed attempt to study disease in the animal. To address these complications, scientists have developed several models including immunosuppressed mice, genetically engineered mice, and even reconstituted mice (mice in the first category but with restored immune systems to better model a human cancer environment).(3)

Each model comes with advantages and disadvantages. Dr. Abazeed called out one of the failings in our first category of mice, the immunocompromised, in that they are not effective environments in which to study immunotherapy, a treatment modality that finds ways to activate the immune system against disease. Animals in that category, however, are optimal for the study of patient-derived tumors due to the lower rejection rates of the tissue.

The goal of each scientific study helps dictate which model to utilize, and even which animals (not touched upon in this post, opossums, woodchucks, and other animals have been explored to determine the best analogy to human anatomy(4,5)) to use.

While mice are playing a critical role in testing experimental agents early in their therapeutic life-cycle (many never advance to human testing), cholangiocarcinoma patients feel keenly the gap of limited options that depend on the precise genetic alterations that too often our tumors do not possess. While the diversity of our disease makes it an attractive research and drug development target, it also means that even when a person possesses the requisite alterations for a drug to be effective, at times, the therapy has only a stabilizing effect, or the patient might even experience progression. Targeted therapies hold promise and possibly even a cure, but for many patients, those advancements are still too far into the future to hold hope for a meaningful application in the present.

Dr. Abazeed and a few pioneering researchers like him have been looking at addressing that gap through an innovative personalized medicine approach of creating avatars. In my search for a good scientific definition of avatar, I found Merriam-Webster’s third description to be philosophically closest to what these scientists are attempting, “A variant phase or version of a continuing basic entity.”(6)

In essence, if an individual’s specific disease can be obtained, cultivated, and implanted into a mouse, not only could that tumor be used for future advancement, but that mouse might be used as a microcosm of the patient to test potential therapies. In his humble way, Dr. Abazeed notes this approach comes with an “admission of ignorance” in that the present state of cancer genetics cannot yet predict the best course of treatment. He counters that concession with a benefit to this approach in that these individual models that collectively contain patient disease with multiple alterations. The opportunity to observe treatment response in these diverse avatars has the potential to advance understanding of the drug-model pairings and help researchers to decide which targets they want to address next.

Additionally, through mouse models and avatars, scientists can observe how treatment modalities damage and change cancer, at times causing them to defensively adapt or to make the disease a better candidate for another treatment. One example of this would be to apply agent A before agent B to enhance the effect, or alternatively, using a agent A with C to model a change in the tumor behavior that allows for the overall treatments to become more effective. Dr. Abazeed referred to this as finding the “collateral” or “supra-additive effects”, respectively. That is, where in the past one plus one equaled two, but when you apply these modalities together (sequentially or concurrently) the new result is three or even more.

Convincing the FDA to allow an avatar to guide therapeutic decisions, on the other hand, is a hill this research has yet to climb due to its infancy. One path around this is to begin with approved standard of care, so in cholangiocarcinoma, the first tests will be chemotherapy regimens that are commonly prescribed for our disease. Another challenge from past avatar studies has been the engrafment rate, or the percentage of mice that successfully cultivate the disease. The first attempts at this type of activity have yielded poor engraftment rates , however Dr. Abazeed’s lab has already produced three successful models with several more that have recently been implanted. The sky may be the limit in this line of research, but the work Dr. Abazeed is doing is so new that regulation will need to catch up to the science before therapeutic value can be confirmed. 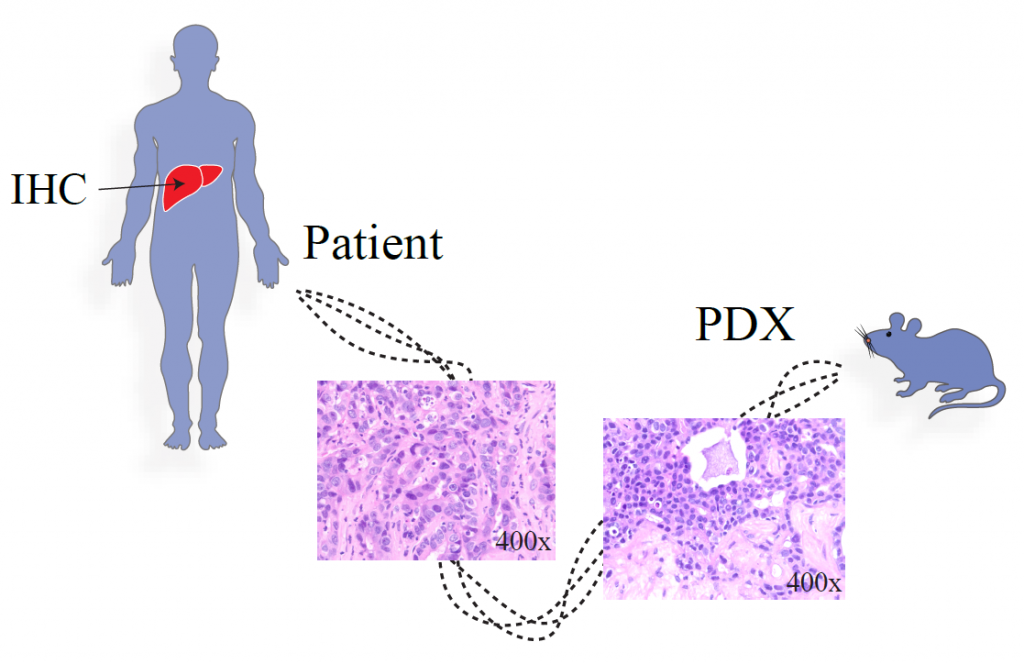 The most obvious limitation to mouse models is that humans are still far more complex, and cancer is bound to behave somewhat differently in our species than even genetically engineered or humanized mice. Researchers like Dr. Abazeed take a therapeutic theory to its limit in their animal models, but with enough success, there comes a point for human testing, a process we are all familiar with through clinical trials. Through these strictly regimented tests, we become the research subjects, a path that comes with hope, pain, triumph, and too often, loss. The risk, however, is often worth the reward, and our participation in trials helps scientists to better understand our disease and how to study it more effectively to design exciting, new treatment modalities.

One of my favorite expressions around advancement is Isaac Newton’s, “If I have seen further it is by standing on the shoulders of Giants.” As it relates to this post, several giants can be identified. There are Giants like Dr. Abazeed who are constantly looking for novel ways to improve survival and quality of life. Our lives are touched by the patient Giants whose tissue samples have been grown into cell lines that are used by researchers around the world and who participate in clinical trials to both help themselves and patients to come.

One unlikely Giant though is the mouse, an organism whose scientific presence changed the course of medicine in the 20th century and will continue into the 21st. Some days it’s hard to see the silver lining, but we are truly lucky for the progress being made through mouse models and other research methods towards a cure for our disease.

Stay tuned for our next post on April 3rd as we dive into the complex world of clinical trials!