Albert Lewis Snedaker, III, passed peacefully in Jacksonville, Florida on December 29, 2020, at the age of 62.

Albert was born on May 26, 1958, in Philadelphia, Pennsylvania, to Albert Lewis Snedaker, Jr. and Emily Dorothy Gibson. He attended Ursinus College, where he graduated with a degree in Economics in 1980. Albert went on to have a 33-year career with the Federal Aviation Administration, retiring to Fleming Island, Florida in 2013.

In his free time, Albert enjoyed listening to music and talk radio, riding his bicycle, writing, and rooting on the Philadelphia Eagles. Albert was also a passionate Wrestling dad who could be found sitting on the side of the mat at every meet.

His favorite place in the world is Wildwood, New Jersey, where he spent his teenage summers working as a roller coaster operator. When Albert had children, it became a family tradition to travel back to Wildwood every summer to create new memories with his children.

Albert lost his battle to Intrahepatic Cholangiocarcinoma, a rare and aggressive bile duct cancer. In celebration of his life and to honor his memory, Albert’s family is asking for donations to the Cholangiocarcinoma Foundation in lieu of flowers. 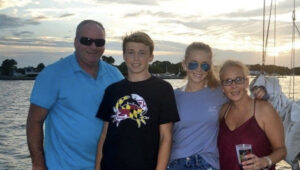 Click here to contribute in the name of Albert Lewis Snedaker, III