I began the last treatment modality post with a tease about controversial cholangiocarcinoma treatments.  Liver transplant is arguably one of the more misunderstood modalities, but radiation just might get the worst rap.  When many lay people hear “radiation”, we think scorched earth.  Radiation historically represents one of the most aggressive treatments and one that by reputation does terrible damage.  The modern radiation landscape, however, presents some of the most exciting treatment options including applications with curative intent.

To help us explore this modality and its potential, I met with Dr. Kevin Stephans at the Cleveland Clinic’s Taussig Cancer Center and asked him to help dispel treatment myths and catch us up on the modern landscape of radiation. 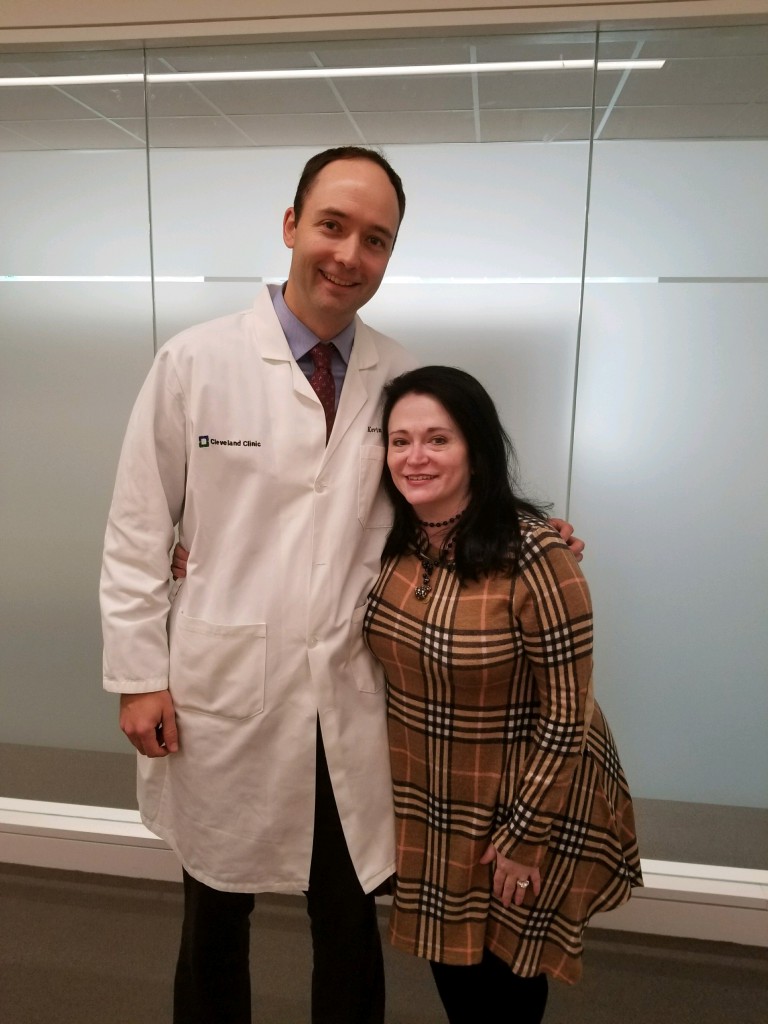 Generally speaking, when a patient is first diagnosed with cholangiocarcinoma, personal research and introductory medical appointments hone in on chemotherapy and surgery, the current cholangiocarcinoma standard of care.  Historically the liver was not a reasonable target for radiation due to the imaging tools used to visualize and treat.  An x-ray would help doctors approximate the anatomy they were working around, but too much healthy tissue was compromised to hit relatively small tumors.  According to Dr. Stephans, the margins required to treat a tumor in the old methods would be largely prohibitive to radiation’s use with cholangiocarcinoma.

With newer technology, however, radiation oncologists can use CT scans to aim and focus down to much smaller regions.  Additionally, in some of the more exciting advancements, the volume of radiation grew from a couple of large beams to many small beams coming from all directions allowing for a focal point where they converge with far less damage to healthy tissue and higher intensity.  In cholangiocarcinoma specifically, this enhanced ability to focus opens the door to potentially curative applications with this disease.

Radiation oncologists apply radiation in a variety of ways.  It is used both in concert with other treatment modalities and palliatively to offer patients relief of symptoms in hard to reach growths.  In the Mayo protocol used to evaluate patients for liver transplantation, doctors use radiation with the intent to eliminate microscopic cancer cells that could cause recurrence in an immune-suppressed post-transplant patient.

A byproduct of the Mayo application has been a discovery that supports speculation that radiation can be applied and tolerated in higher doses than previously believed.  In a small population of patients who received the pre-operative radiation in their bile ducts but could ultimately not have the liver transplant, the bile ducts themselves recovered from the radiation far better than expected.  Insights like this learning aided in modern clinicians beginning to consider radiation with curative intent in unresectable cholangiocarcinomas.

During our interview, Dr. Stephans introduced us to three of the most commonly applied forms of radiation (there are others not covered in this post).  The first, low dose external beam radiation, is used over a longer period of time across larger areas.  The healthy tissue is given time to heal through the treatment, while tumor cells are killed, most lacking the ability to fix the damage done like normal tissue can.  This type of radiation is often applied pre-operatively to shrink cancer enough for transplant as in the Mayo protocol or for resection.  Due to the low doses and cancer’s genetic ability to adapt, this modality is not typically applied with curative intent.

The second commonly applied form of radiation in cholangiocarcinoma is an internal application called brachytherapy.  In brachytherapy, a catheter through the nose, mouth, or skin is threaded down through the intestines or the liver to access the bile duct.  A radioactive source is then placed within the bile duct tumor or stricture with the intent to shrink the tissue and relieve symptoms or allow for future surgery.  When coupled with a low dose external beam radiation, brachytherapy can also have curative potential by again pinpointing an area for the radiation to reach its highest efficacy.

Its dose presents a limitation, however, as it needs to be used away from sensitive anatomy that might fall casualty to the intense therapy.  For this reason, stereotactic radiation is used more in intrahepatic cholangiocarcinomas and with rising frequency in metastases to regions such as the lungs.

At this point you might be convinced that radiation is worth a second look based on its treatment potential, but you’re probably still a little nervous about the side effects.  Every treatment modality comes with its spectrum of common, relatively innocuous risks all the way to the rare, worst-case scenario. Radiation is no exception, however the common side effects are far more tolerable than seen in the past.  Many patients experience fatigue, which becomes more significant with more treatments and can sometime have a delayed presentation (for example, a patient may become most fatigued a few weeks after treatment ends).

Carefully dosed medication controls another commonly experienced side effect: nausea.  Additionally, while it is less commonly seen, patients sometimes experience skin irritations that resolve post treatment and can be eased with topical aids.  Fortunately, with those rare exceptions, radiation comes with few side effects, and some patients never experience anything negative beyond slight fatigue through their therapy.

Looking to the Future

Modern medicine continues its arc to personalized medicine, and according to Dr. Stephans, radiation will benefit from the same scientific discoveries that are being used to design targeted drug therapies.  As with other modalities, some patients seem to inexplicably respond better to radiation than others, and Dr. Stephans predicts that there might be an underlying genetic root to this phenomenon.  He noted that what we call “cholangiocarcinoma” presents in remarkably diverse ways, and these different tumor behaviors theoretically have an underlying genetic cause.  As our understanding of genetic predictors grows, there may be a future where patients are matched with the appropriate treatment based on their molecular profile.

The Case for Radiation

The data around modalities such as resection is relatively rich considering cholangiocarcinoma’s limited population.  As radiation is applied to more patients, however, the data is beginning to mount in support of it being looked at as a first-line treatment in select patients.  A patient who is otherwise not a surgical candidate might later qualify for surgery thanks to an external radiation used to shrink a mass to a more manageable size.  A surgeon could use brachytherapy in a transplant candidate to limit as much as possible the presence of microscopic cancerous cells that could result in recurrence after a transplant.   Stereotactic radiation might be considered in a patient who is too weak for resection as a curative alternative to palliative chemotherapy thanks to its precision and high degree of tolerability.

As with much of the cancer journey, patients need to advocate for themselves, and asking questions about radiation as a treatment option would be a great example of that self-service.  Some oncologists might be very familiar with radiation as a modality and readily agree to exploring this route or have well-thought out reasons to choose a different treatment path, but, when in doubt, a patient can always ask for a second opinion from a radiation oncologist.  They might come to the same conclusion, but there is no one better to assess a treatment’s potential than the person who uses it every day.

Stay tuned next Tuesday for a special follow-up post describing a hypothetical application of SBRT including information on the preparation, treatment, and recovery process.  The audio of this interview will also be included with that post for curious minds to have a listen.

Disclaimer: The information contained in this post is not comprehensive and is not intended to be a substitute for a medical consult.  If interested in radiation as a potential path for you or a loved one’s treatment, please discuss this with your doctor.