“A big reason for our donation is the love we have for Stacie and everything she has done for the Cholangiocarcinoma Foundation (CCF) and the patient community. For years, we have watched our family’s involvement with CCF and now that we are in a position to help, we are trying to make the biggest impact we can to help the science move forward,” explained Geri Clements.

Brad Clements grew up with Mark Clements, a cholangiocarcinoma (CCA) patient and Stacie Lindsey, CEO and Founder of CCF. Brad has worked for a successful software company for nearly 25 years and Geri is a professor at Brigham Young University teaching Biblical Hebrew.

Brad and Geri have followed CCF activities since its founding in 2006 but were not in a position to become more involved until recently. “After meeting with Stacie and getting an update on the Foundation, there were really two reasons why we decided to donate. First, we felt that an early stage investment to fund scientific projects with CCF would go a lot further than the same donation to an organization like the American Cancer Society, that has vast resources. Second, was our experience with Mark,” explained Brad. “Seeing what it was like for Mark to have no support, either on the organizational or research side, we felt like we wanted to see more happening there so families in the same position could have more hope.”

When asked if they had some advice for others who may be in the position to make a large contribution to CCF but haven’t yet, Brad answered, “I would say two things, first, think about where you can do the most good. We felt our donation would have a significant impact now, instead of waiting until later when it might not have as big of an impact. And second, the longer you wait, the less likely it is that the money you donate will impact the life of someone you care about. I didn’t want to wait and leave CCF a donation in my will, I wanted to help people now.”

“From a personal standpoint, we are finding that with the resources we’ve been blessed with, it is much more joyful to make donations like this. We just remodeled our home and it’s lovely, but it did not generate nearly the feeling of joy and meaningfulness that making a donation to CCF has for us,” added Geri.

“The Foundation would like to publicly thank Brad and Geri Clements for their generous donation. We know that a cure for CCA will only emerge from successful investing and collaboration in the clinical and basic science research communities.” said Stacie Lindsey, CEO and Founder of the Foundation.

The other part of their donation will jointly fund a critically needed set of research tools that will be developed by Dr. Supriya Saha at Fred Hutchison Cancer Research Center and will be made publicly available upon completion.

Everything CCF funds and develops relates directly back to our core values of: Patients First, Collaboration, and Urgency, including awarding $1.9 million in research funding to-date. Funding critical research projects is one way we can push scientific progress forward toward ultimately finding a cure for this devastating cancer.

If you would like more information about funding urgently needed research and patient programs, please reach out to Jordan Giles, Development Officer at Jordan.Giles@cholangiocarcinoma.org. 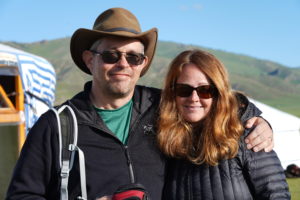 "...the longer you wait, the less likely it is that the money you donate will impact the life of someone you care about. I didn’t want to wait and leave CCF a donation in my will, I wanted to help people now..."