For nearly two years, Jonathan Whiting has been training to swim the English Channel in honor of his late wife, Lori Whiting, and to raise awareness and funds for the Cholangiocarcinoma Foundation. The rare bile duct cancer took the life of 53-year-old Lori, on Oct. 11, 2016, and left a void that Jonathan has filled by exercising his skills as a decorated triathlete. The 60-year-old St. Louis, Mo., man will swim 21 miles across 57- to 60-degree water in the famous channel that separates southern England from northern France between July 17 and July 23, 2022 — weather permitting.

“The Channel Swimming Association governs all documented swims across the channel. Swimmers cannot wear a wetsuit, and once a swimmer starts the swim, they must swim the entire length unassisted,” said Jonathan. “For example, the swimmer cannot rest on the boat or use a flotation, and nutrition is delivered to the swimmer by a pole from the boat. There are seven days held open to monitor weather and currents for safety. Once the pilot (escort boat) says ‘it’s time,’ the swimmer must head out.”

As of the end of 2020, 2,157 individuals had completed the swim across the water passage, according to Swimming World Magazine. Jonathan intends to increase that number with continued training in 2022 that includes a 10-mile swim in the North Pacific Ocean between Lahaina and Maui in Hawaii at the end of April, and a 12-mile swim across Lake Tahoe in June. With every kick and every stroke, Jonathan keeps Lori’s spirit in his heart and mind.

Yet, keeping his wife’s memory alive is not his only motivation for swimming the narrow arm of the Atlantic Ocean. He is committed to increasing awareness about bile duct cancer and raising much-needed funds for cholangiocarcinoma-specific research with his campaign, “21 Miles of Hope.” His goal is to raise $100,000 by the end of 2022 for the Foundation that’s mission is to support patients and render cholangiocarcinoma a treatable disease.

“When Lori was diagnosed, we were advised that she had a 15% chance to live five years. There is no treatment or early detection available, and surgery was the only option. When trying to research this type of cancer, there was little (if any) information available,” Jonathan said. “To me, it felt like this is not fair to those diagnosed with such little hope. I felt it was my mission to bring awareness and funds to the Cholangiocarcinoma Foundation for research. The best way I could think of doing this was by swimming across the English Channel.”

Approximately 10,000 people in the United States are diagnosed each year with the hard-to-diagnose, difficult-to-treat type of cancer. It is often overlooked as symptoms can mimic those of other illnesses. Conventional cancer treatments remain ineffective against cholangiocarcinoma.

According to National Cancer Institute data, the incidence of cholangiocarcinoma is on the rise. Cholangiocarcinoma is an aggressive and lethal tumor, which arises from the epithelial cells of bile ducts. It comprises about 3% of all gastrointestinal malignancies and its incidence has been increasing. According to a recent study (JAMA Network Open), it is estimated that by 2040, liver and bile duct cancer will be the third deadliest cancer in the US.

“Cholangiocarcinoma is a deadly cancer of the bile ducts. Because the symptoms from this cancer can initially be mild and are common to many other diseases, it is important that we educate the public, and Jonathan helping us do that with his campaign is laudable,” said Foundation CEO and Founder, Stacie Lindsey. “We want to assist patients to get to the right doctor, have the right diagnostic tests and understand all of their treatment options. We can then give them the support and resources they need to advocate for their care.”

Advocating for care is something Lori did in the midst of going through treatment herself. Jonathan said Lori was fearless. Instead of saying, ‘Why me?’ she said, ‘Why not me? The cancer just wants to live, too.’”

“Lori always smiled and was never afraid. She wanted to help other cholangiocarcinoma patients with their fears. Once, she asked that I videotape a procedure called Apheresis, where blood is extracted from one arm, plasma is removed, then the blood is inserted back into the other arm. She wanted to show patients that it’s OK and provide comfort,” Jonathan said.

Lori’s bravery inspires Jonathan and keeps his focus on conquering the channel with the help of coach Carol Breiter. Carol is a retired competitive marathon swimmer who’s coached successful swimmers across the channel since 1985. She successfully completed the swim across the English Channel herself in 1983. From her advisement, Jonathan swims at the Center of Clayton in St. Louis using paddles and a tube to build strength for holding a certain pace through the tides to prepare for the completion of the channel swim.

“If anyone can do it, Jonathan can. He is unrelenting in his cause, motivated by the love he maintains for Lori and the desire to educate people about bile duct cancer that took her life,” said Jennifer Weaver, Foundation Director of Communications. “If he can help spare anyone else the pain of loss he feels every day, he’ll do it with this swim and by sharing his story to give others hope by continuing the advocacy that Lori started.”

Jonathan is submitting a proclamation to Madisonville, KY, to declare March 14, 2022, Lori Whiting Day, which would’ve been her 59th birthday. He is also accepting donations on his website, 21MilesofHope.org. Supporters are welcome to donate and follow his swim journey on the website that includes his training log, photo gallery and videos. 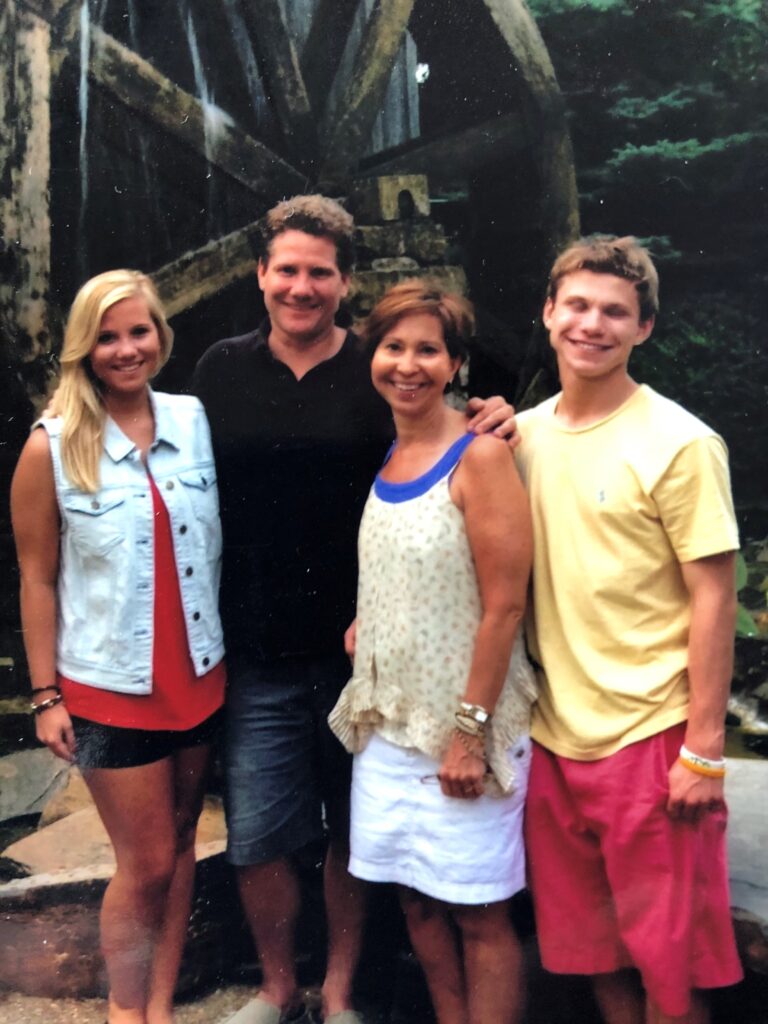 “When Lori was diagnosed, we were advised that she had a 15% chance to live five years. There is no treatment or early detection available, and surgery was the only option. When trying to research this type of cancer, there was little (if any) information available. To me, it felt like this is not fair to those diagnosed with such little hope. I felt it was my mission to bring awareness and funds to the Cholangiocarcinoma Foundation for research. The best way I could think of doing this was by swimming across the English Channel.” 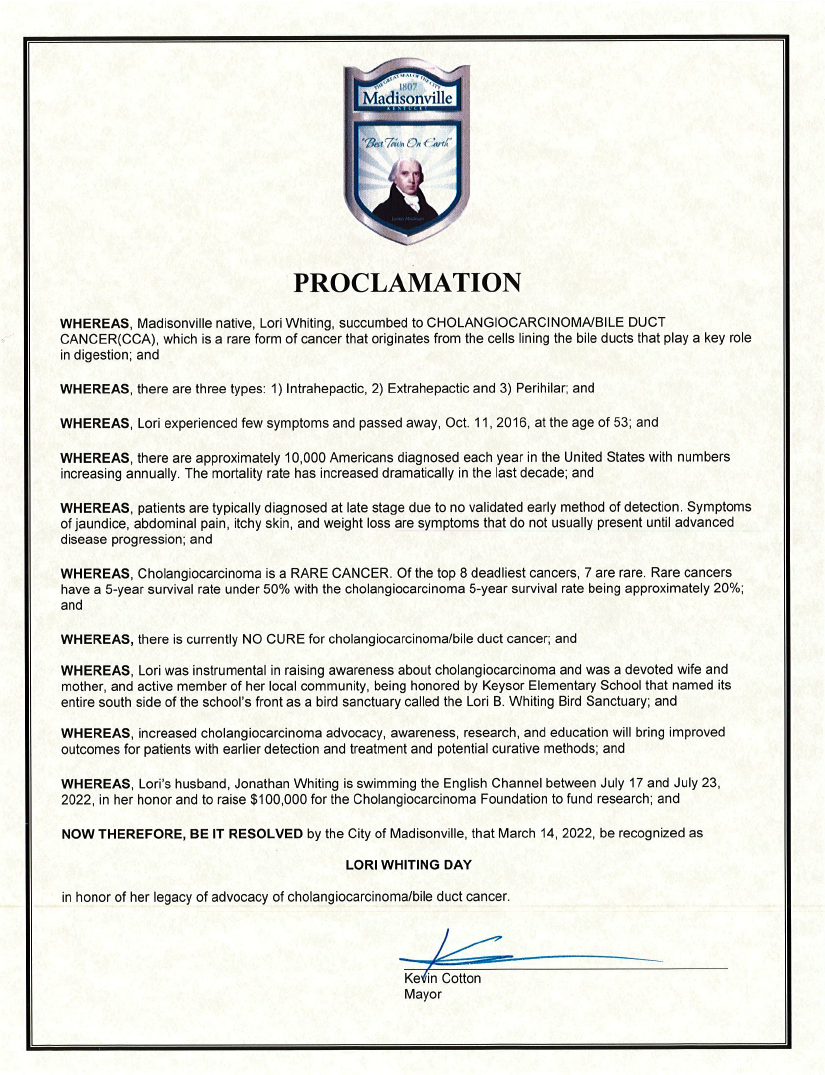