TeamCCF and the Cholangiocarcinoma Foundation held its first-ever virtual athletic fundraising event, Moving for the Cure, the week of July 5th.  “With Covid-19 restrictions in mind, TeamCCF wanted to host a fundraiser that would bring family and friends together in a fun and safe way,” explained Meredith McGuffage, TeamCCF Coordinator.  Each participant was asked to set up a fundraising page and choose an activity to do on their own or with family/friends. “We were not sure what the response would be given that we had a short amount of time to plan and execute the event. Our goal was 30-35 participants and we hoped to raise $10,000” said Jordan Giles, development officer for Cholangiocarcinoma Foundation. Ultimately, the event had more than 180 participants who raised over $52,000.

Diana Park, of McKinney, Texas, an avid Team CCF member shared, “Over the past 3 years I have run multiple races for TeamCCF to raise awareness for Cholangiocarcinoma. My family has always cheered me on from afar.  Moving for the Cure was an opportunity to participate alongside my family. My three girls could not wait to help raise funds for awareness/research and to run a “race” with me. More importantly, as a family, we did something together to honor my mom, their Gigi. Moving for the Cure gave us this opportunity to do something good during a time of uncertainty.’

Without restrictions on how to move, each participant was very creative in their choice. Ashley Stoneback’s family along with her two sisters and their families participated through a series of events including crazy costumes and potato sack races to honor their dad, Peter Alles. “We signed up because our father has been battling bile duct cancer for 1 year now. He is the rock of our family. We want to do anything we can to show support for him and all those who are fighting this terrible disease. My family had a great time participating in the event. We are a close family and enjoy doing activities together where we can laugh and have fun. The grandchildren had a great time being a part of it! My dad, their Pop Pop, is a hero to them. They see what a hardworking, strong, and incredible man he is and he is our motivation every day to be better and to work hard.” 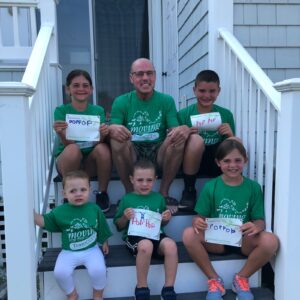 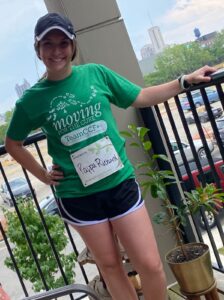 Samuel Miller signed up with his brother and sister in memory of their grandpa who passed away in 2010. “Since this was a virtual fundraiser, my family and I were able to participate across state lines. I made my video in Boston, MA, and I edited together my sister running and my brother lifting in Ohio. I got creative and did the dance to "Thriller" by Michael Jackson. Moving for the Cure provided a platform for ample ideas to come to life.”

Rob Howard found the Cholangiocarcinoma Foundation in May of 2020 when his father was diagnosed with cancer. Initially, they only share the news of his diagnosis with immediate family members. “It was easier to process with a small inner circle,” Rob shared. “At first, I was uneasy with fundraising. However, I knew how important CCF has been to me, my dad, and my family.” Rob explained. “I sent it out to extended family and a broader circle of friends who were hearing the news about my dad for the first time. Like us, it was likely the first time they would learn about cholangiocarcinoma and the wonderful Cholangiocarcinoma Foundation.  Within just a few days I had exceeded my $1000 goal.  I made an adjustment to aim for $2000 and was surprised to surpass that goal after another few days.  I was humbled by the encouraging support, prayers, and generous donations in honor of my dad, my family, and me.  It was such a comfort to know that we had some many people in our corner cheering us on, praying for us and wishing us well.” Howard completed his half marathon run on Saturday, July 11. He mapped out 13.1 miles from his sister's house in Encinitas, California, and finished his parent’s house in Del Mar where he was greeted by an entourage of cheering neighbors and his proud dad. In the end, Howard raised $6,028. 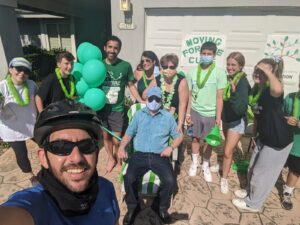 "Moving for the Cure exceeded our expectations. We have a wonderful community of people within CCF and, as always, they showed up to support each other and raised vitally needed funds in creative and imaginative ways” said Laura Hnat, Vice President and Chief Development Officer for Cholangiocarcinoma Foundation.

Plans for next year’s Moving for the Cure are already underway. Next year’s event will take place the week of July 18 – July 24, 2021. For sponsorship information, or to help plan the event, please contact meredith.mcguffage@cholangiocarcinoma.org.