Our dear father, Dilip Kumar Saha, known as "Dil" to his family and friends passed away on Sunday, August 15th, 2021. He is survived by his loving wife Sipra, his son Soudip "Ted" and daughter-in-law Deepa, his daughter Nilova "Tina" and daughter-in-law Maria, and his grandsons Nithin and Ari. Sipra and Dil recently celebrated their 51st wedding anniversary. Dil loved to travel the world with Sipra, and they were able to stick pins into 20 countries on their world map. Dil made friends everywhere he went with his warm smile for everyone and was generous with his knowledge and loving heart.

Dil was born in Calcutta, India in 1941 and got married to Sipra in 1969. After training as an electrical engineer at Indian Institute of Technology in Kharagpur and securing a Masters in Business Administration from the MIT Sloan School Program at the Institute of Management in Calcutta, he left India for the first time and emigrated to the United States in 1970 by himself with some money in his pocket and a suitcase. He left behind a large extended family and all that was familiar.

Sipra joined him in 1970, and they grew their family after living several years in Chicago, IllInois, then Atlanta, GA, and settled in Houston, Texas where they lived for 35 years. Despite his work-life having its ups and downs including long hours and long commutes, he always kept a zen temperament and an unflinching focus on building opportunities for his kids.

Dil and Sipra moved to Boca Raton, Florida in 2016, lured to a home on the water close to their grandchildren who only know him as "Dadu."

He was always young at heart, sneaking sweets, devouring politics, and snapping pics of every moment.

While Dil only received a confirmed biopsy positive diagnosis of cholangiocarcinoma in May 2021 and endured severe deterioration in health thereafter, he had had an indeterminate and mostly quiescent biliary stricture discovered after gallbladder surgery in July 2019.

Click here to contribute in the name of Dilip Kumar Saha 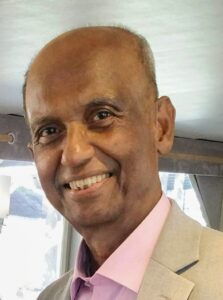