Assuming you haven’t tackled one before, have you ever really thought about what it takes to run a marathon?  If a runner maintains a 12-minute mile pace (essentially a jog) and does not take walk breaks, it would take them 5 hours and 14 minutes to complete the 26.2-mile course.  For some perspective, if you’ve ever watched the BBC’s 6-part mini-series of Pride and Prejudice, take the time you sit on the couch watching each episode back to back and imagine that instead of falling in love with Colin Firth’s Mr. Darcy, you’re running.  Without stopping.  For 26.2 miles.

Is anyone else insanely impressed by that?  I know I am, and on this past Sunday, we had 8 runners for Team CCF do just that in Chicago. 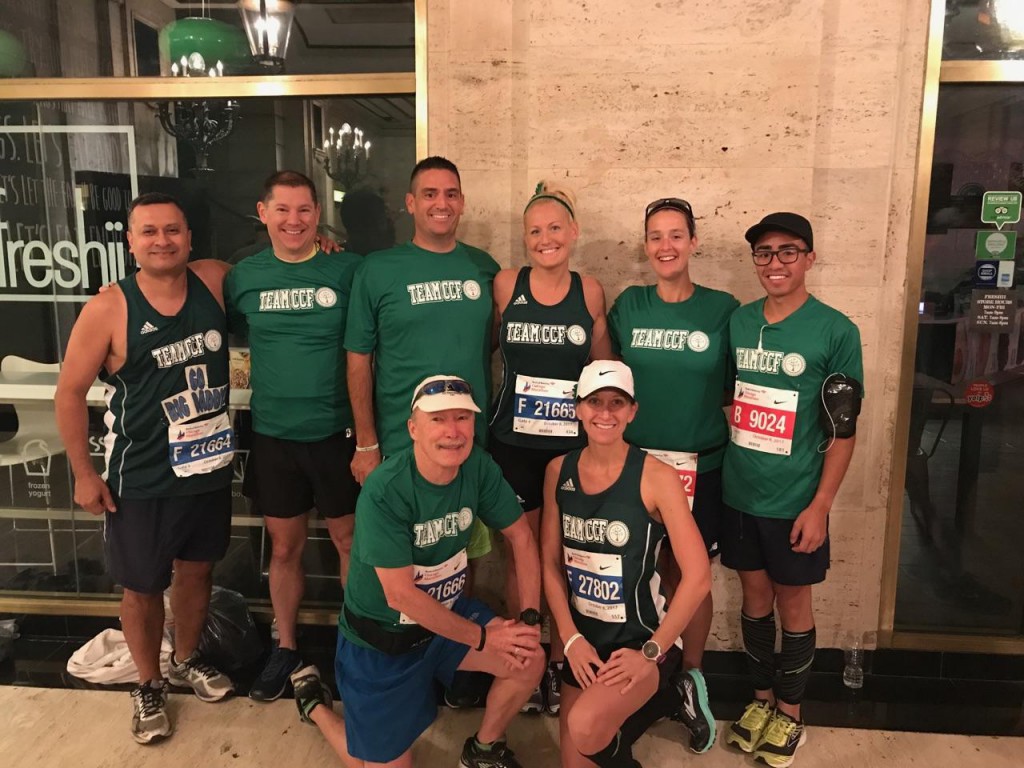 The Foundation has benefited from runner participation in the past, and often long distance runners use these races to fund raise for causes they are passionate about.  As an organization, we have received donations from these isolated running enthusiasts, but it wasn’t until Katie Glenn decided it was time to tackle her first marathon since her father passed away from cholangiocarcinoma in May of 2016 that a team was formed.

Through networking with the CCF family she began to find runners who had been touched by this disease and would be interested in joining the inaugural Cholangiocarcinoma Foundation team.  As Katie herself is located in Chicago, that felt like the right place to start.  The seven other runners found their motivation in personal losses to cholangiocarcinoma, one runner lost his wife, another one of his best friends.  One participant and his running partner traveled all the way from Baltimore for the chance to run for the Foundation in the first organized group.

The participants trained exhaustively and had to meet a fundraising minimum just to run.  By race day, Team CCF had raised a total of just over $23,000 for the Foundation! 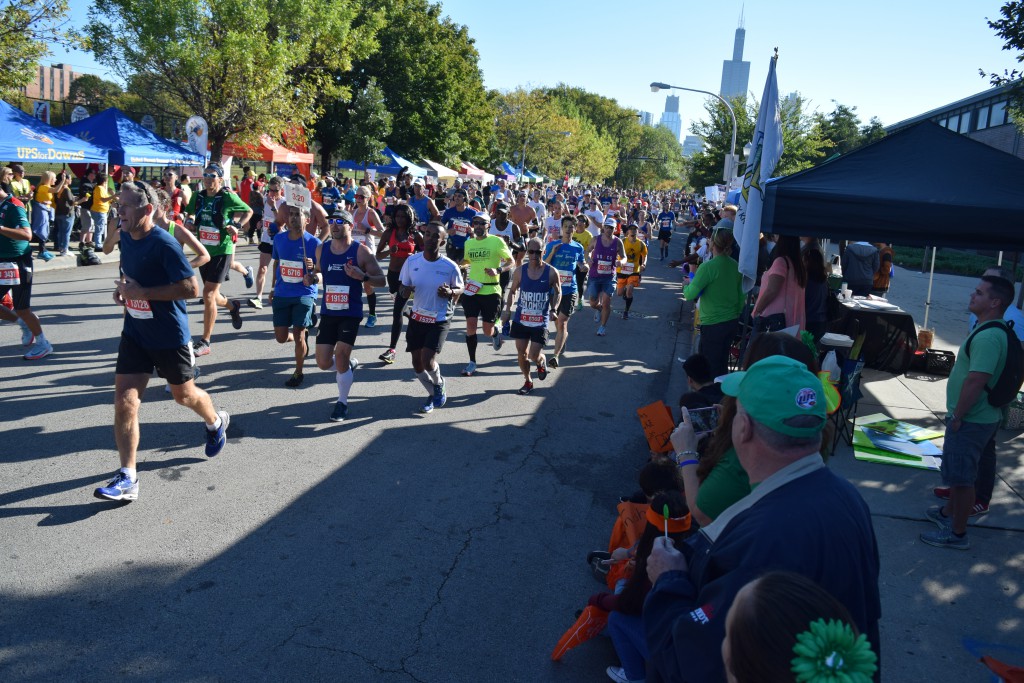 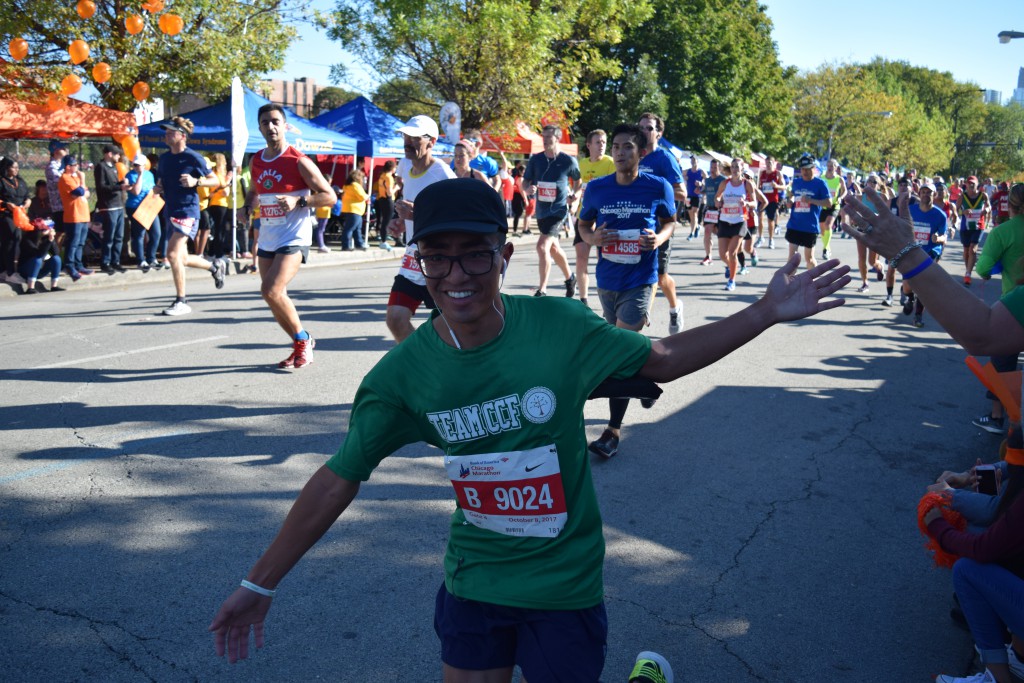 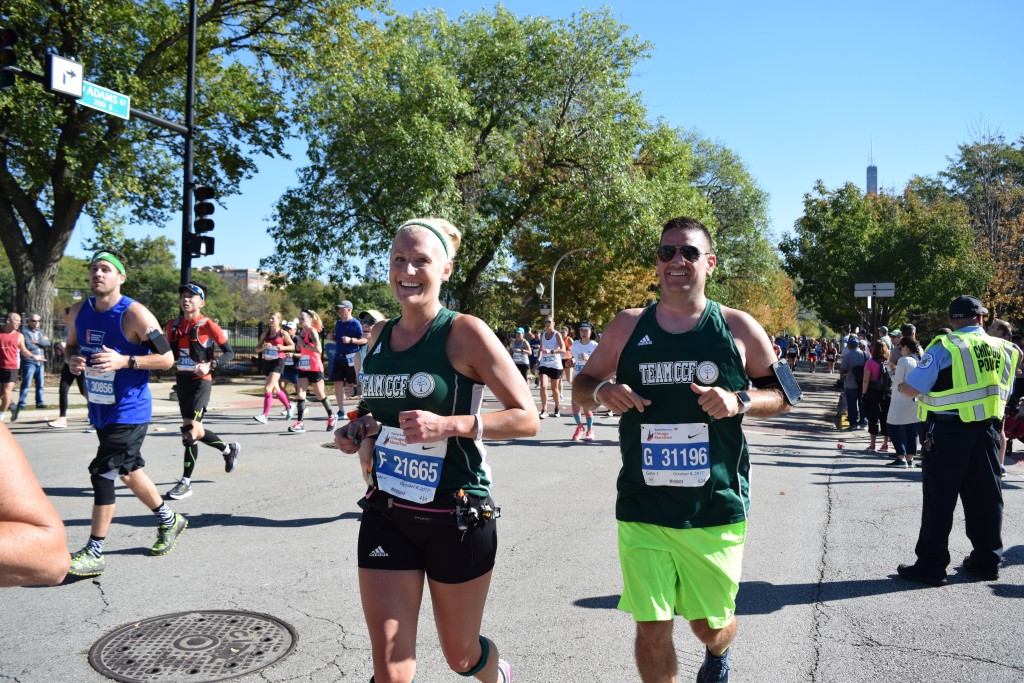 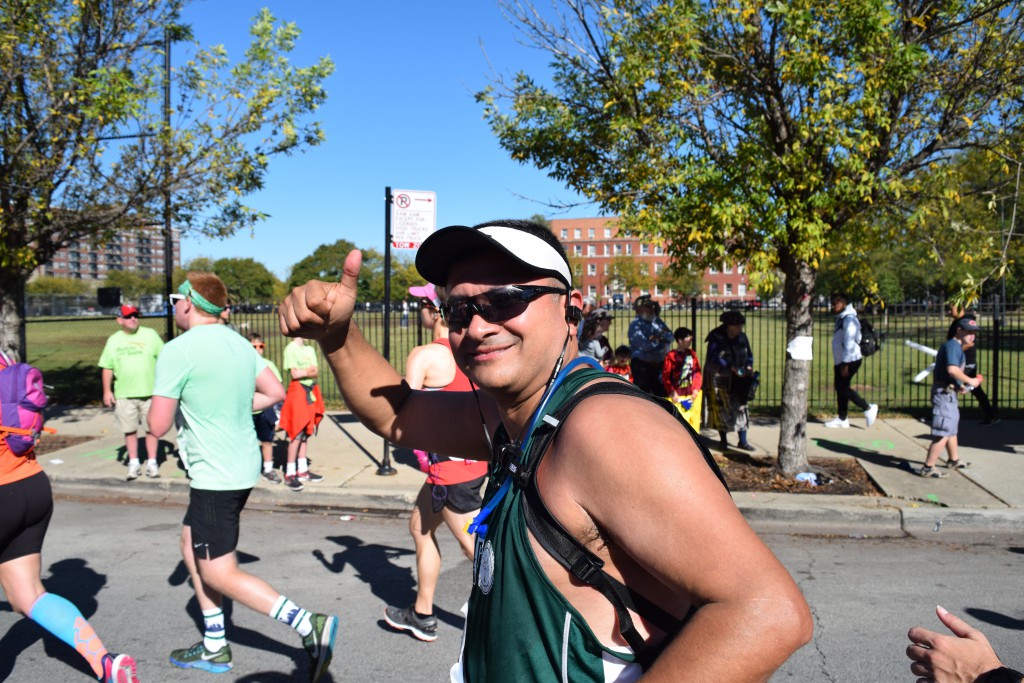 It’s not a simple thing to organize a team for one of the country’s largest marathons I learned as I sat next to Katie in a restaurant after she had completed the race.  She pulled out her phone and scrolled through a mammoth email that she had received from the race organizers a few weeks before and commented that she received almost one such email every day.  I was in awe of her energy as she talked about the challenges and learnings she had encountered through this experience.  She had just completed a 26.2 mile run, and she was still articulate enough to talk about her experience.

She currently has two other runs in the hopper that she’s organizing, Cleveland and Philadelphia, and her hope is to make Team CCF scalable to energized teams around the country.  Although she won’t be running these and joked her marathon running days are over (I’ll believe that when I see it), she talked a little about what running this race meant for her:

There was also a group of survivors, caregivers, and friends supporting the runners at the 14th mile in the charity block party.  Eleven cheerleaders in total came to the tent, and one of the runners said that spotting the group madly cheering him on a little over halfway into the race was one of the things that helped him get through.  For the runners, it was moving to see the faces of those they were helping, and runners and spectators alike said that they look forward to supporting future participants who take on this challenge for a beautiful cause. 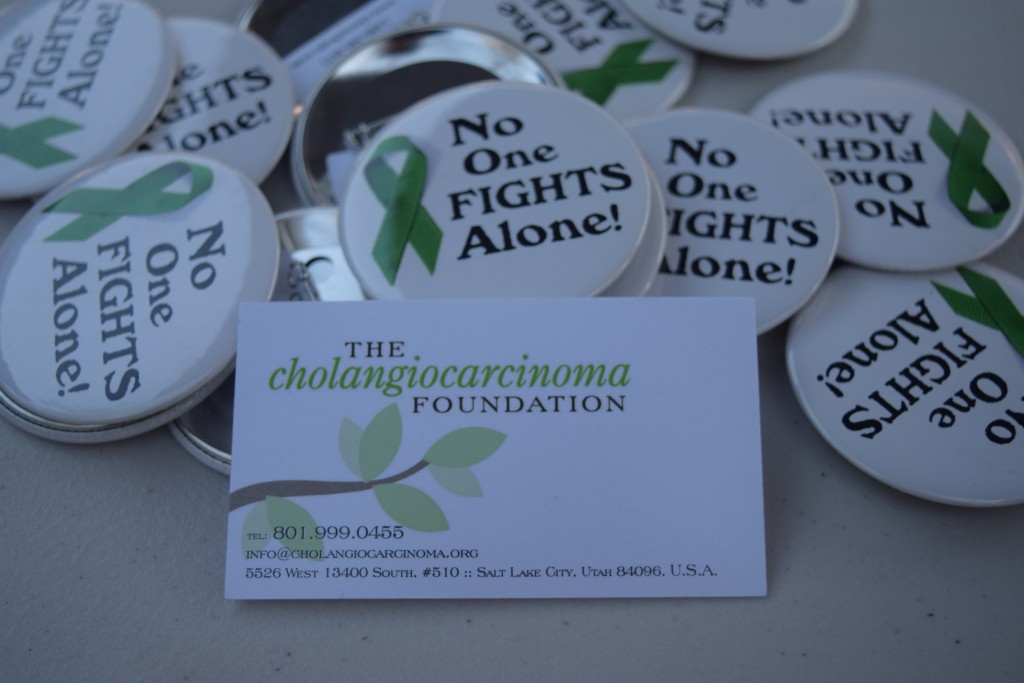 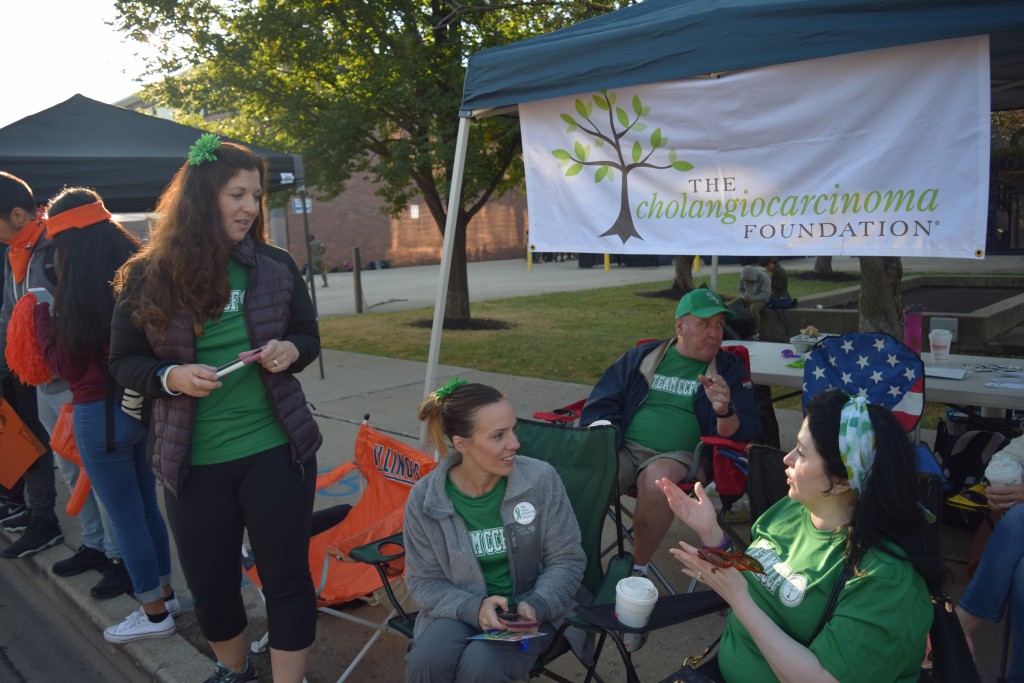 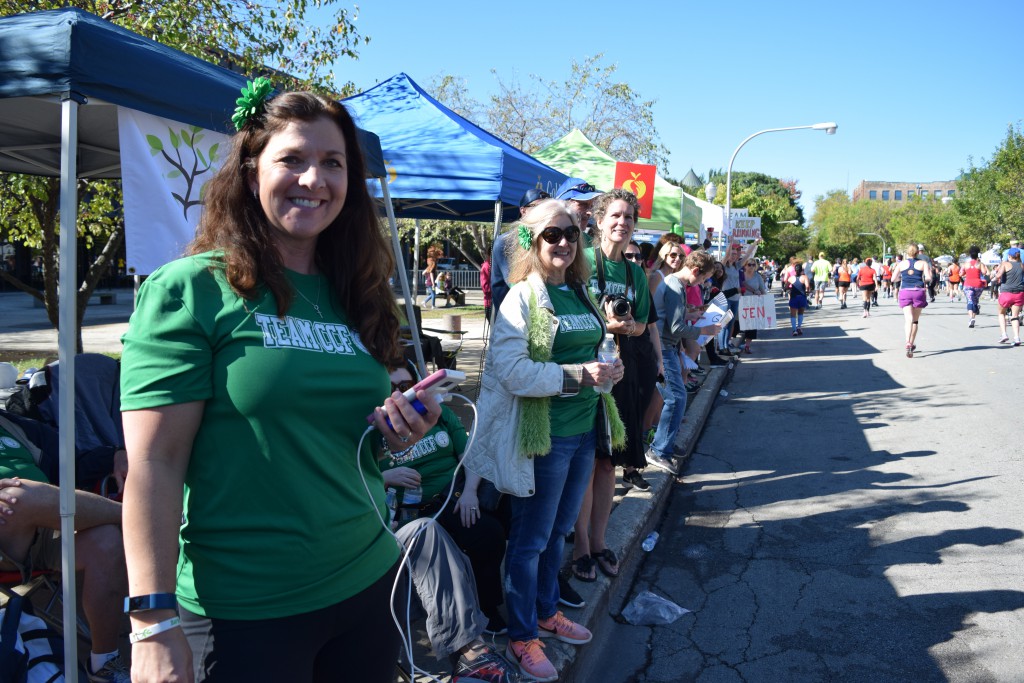 So much good can come when a talent like running meets a passion for fundraising for cholangiocarcinoma research.  I’ve heard described before the ‘runner’s high’, but Katie’s description of how she felt after completing this marathon is far more powerful.

I felt like I have gained a part of myself back.

Stay tuned next time for our post recapping the C.A.R.E. team’s visit to Chicago!  This was supposed to be included in today’s post, but as you can see, the marathon was more than enough to fill a post.

p.s. If you are interested in participating in a marathon with Team CCF or would like to start a team in your area, send me your contact info (cait.telaak@cholangiocarcinoma.org), and I will pass it along to Katie.  The goal is to have Team CCF participate in races of a variety of lengths, so if you aren’t feeling up to a marathon, you could form a team and fundraise for the distance you’re wanting to run.