SALT LAKE CITY, UT – Delorean Ostrom of Suwanee, GA, and his family's life changed when his wife, Mandy, was diagnosed with a rare bile duct cancer called cholangiocarcinoma. To pay tribute to her, Ostrom is running a marathon every month this year in a campaign called “Racing for Hope,” with all proceeds to benefit the Cholangiocarcinoma Foundation. He aims to raise $12,000 to support cholangiocarcinoma research for early detection.

“After getting out of the hospital and knowing my wife had some fighting to do, not only for her but for our little girls, I decided to do everything I could to raise awareness of this lethal cancer and to be as strong as I could for my family. I decided to run the Chicago marathon and raise money and awareness for the Cholangiocarcinoma Foundation,” said Ostrom.

Approximately 10,000 people in the United States are diagnosed each year with the hard-to-diagnose, difficult-to-treat type of cancer. It is often overlooked as symptoms can mimic other medical conditions. Conventional cancer treatments remain ineffective against cholangiocarcinoma, which is why in 2016 the Foundation started TeamCCF as a way to raise money through athletic events. Through the years, TeamCCF has participated in numerous races, such as the TCS New York City Marathon, Bank of America Chicago Marathon, Denver/Colfax Marathon, and the AACR Philadelphia Marathon, Half Marathon, and 8k.

Delorean was a member of TeamCCF and had run marathons for the Foundation after his wife, Mandy Ostrom, was diagnosed with the rare cancer in December 2019. She was pregnant with her second child at the time and had surgery to remove her gallbladder, and that's when her doctors found cancerous tumors in her bile ducts. Her treatment included removing part of her liver, gallbladder and lymph nodes, followed by chemotherapy. After numerous chemo treatments, Mandy gave birth to a healthy baby girl.

To date, Ostrom has run a total of eight marathons:

“It was an honor to be able to show support for Delorean Ostrom as he ran the Boston-Bound Marathon about an hour away from my home. Being this close, I wanted Delorean to know that this cholangio patient appreciated his extraordinary efforts,” Phil Baughman, cholangiocarcinoma patient. “I was thankful I got to meet Mandy and their girls. I was impressed with Mandy’s positive attitude and determination as she fights to keep this cancer at bay. It was such a blessing for me to have this opportunity to show support for another patient.”

These marathons have been challenging for Delorean not only physically but also mentally. Like a marathon, Mandy’s cancer journey has had many ups and downs. During the campaign, Mandy has undergone different treatments and had regular check-ups and scans. At the end of marathon number two in February, Mandy surprised Delorean with a sign that stated her scans showed no evidence of disease (NED).

However, in July, Mandy received the devastating news that her cancer was back. As heartbreaking as Mandy’s second diagnosis of cholangiocarcinoma was, Delorean resolved to continue his campaign. Today, he is more determined than ever to keep raising awareness about cholangiocarcinoma and sharing Mandy’s story so that his two young girls grow up with their mom.

“We don’t know how long it will take for these results, and we have no clue what the next step is, but I know that I will be there next to her. I’ll be the shoulder to cry on, I’ll be her cheerleader, I’ll help her fight because no matter what this cancer tries to take from us, it will never take the love I have for her,” said Delorean.

According to National Cancer Institute data, cholangiocarcinoma is on the rise. Cholangiocarcinoma is an aggressive and lethal tumor that arises from the epithelial cells of bile ducts. It comprises about 3% of all gastrointestinal malignancies, and its incidence has increased. According to a recent study (JAMA Network Open), by 2040, it is estimated that liver and bile duct cancer will be the third deadliest cancer in the US.

Visit racingforhope.org to read Ostrom’s blog updates and to support his cause. 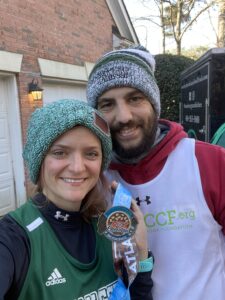 “After getting out of the hospital and knowing my wife had some fighting to do, not only for her but for our little girls, I decided to do everything I could to raise awareness of this lethal cancer and to be as strong as I could for my family. I decided to run the Chicago marathon and raise money and awareness for the Cholangiocarcinoma Foundation."